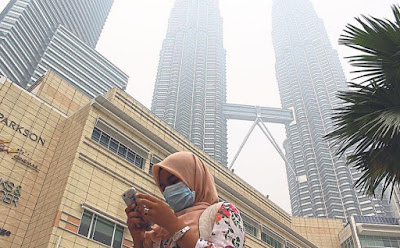 SO should we just chain ourselves to trees, I asked environmentalist Puan Sri Shariffa Sabrina Syed Akil at the sidelines of the recent KL Fashion Week.

The Pertubuhan Pelindung Khazanah Alam Sekitar (Peka) president broke into a smile while her associates, who were seated  on the same table, laughed.

In a classy blue dress, accompanied by a tiara on her head, Sabrina looked like an Arabian princess from a Walt Disney movie as we discussed something close to our hearts —Mother Nature.

She apologised for being “overly” dressed, stressing it was her way of showing support to the fashion show. But she was certainly not sorry over her sharp criticism of the authorities in protecting the environment.

There are those who have rubbished Sabrina’s work, and those who speak ill about the work of Peka and similar NGOs. Environmental activists are often seen as those with nothing better to do expect to go against any form of development.

“People often forget where they come from. If we don’t protect nature, then there will be no future for our children,” she said.

“I’ve had issues with politicians, even royalty. Trees are being chopped and land cleared indiscriminately. It takes centuries to make a jungle and only days to destroy it.

“They think we oppose development. We don’t. We just want a balance between development and nature.”

Sabrina’s words rang in my ears as I drove to work on Monday. I left Ampang at 7.25am and reached Petaling Jaya at 8.45am. It was a slow drive, not due to heavy traffic but because of poor visibility.

The haze may have blurred my vision, but I could see clearly how the average man-on-the-street  is suffering.

Motorcyclists tied bandanas around their faces while some motorists drove with face masks despite their windows wound up tight.

Even animals are suffering. Birds are hardly flying while my pet dog has been sneezing since the air got bad.

It’s an annual affair. Large tracts of land are being cleared in Indonesia as the authorities there continuously combat peat fires. Winds bring smog to Malaysia and Singapore, causing citizens to suffer.

This has been going on for decades. Governments play the blame game. Yet, no one is able to do anything. Nothing has been done.

People fall sick and work productivity is affected. The same cycle is repeated the following year. When will this stop?

If Asean is all about unity and togetherness, then the nations concerned should end such suffering. To say Malaysia and Singapore enjoy good air for 11 months and bad air only for one month is utter rubbish.

If Malaysian and Singaporean companies are behind the forest fires in Indonesia, then the local authorities should come down hard on them. Penalise them, ban them. Just do something.

We forget about the trees only to be reminded when the haze envelopes the country. By then it is too late as nature has been destroyed, the atmosphere tainted, leaving the people to suffer.

Why is it right for people to destroy trees but wrong for us to tie ourselves to trees to stop the massive rape of jungles? Where is the justice?

As Sabrina said: “This is where the leaders should step in end it, as we are only able to do so much.”

The FA of Malaysia (FAM on Monday revealed it is seeking new coaches to guide the national and Under-23 squads. Nothing new there, except for the criteria. FAM vice-president Datuk Mokhtar Ahmad raised eyebrows when he told the press the national body was seeking someone who is “able” and a “professional”. Are we missing something?

The problem with FAM is that it has adopted a trigger-free culture — ‘shoot’, explain later. Stakeholders are confused.

They announced a task force to assess the poor performance of the national team but had no clue about the roles of those in the set-up.

Such a move is not new. In 2007, a similar task force was formed to “evaluate the poor performance of the national team” following our forgettable outing at the Asian Cup.

The committee, then headed by Datuk Redzuan Sheikh Ahmad, was supposed to submit its report, including a post-mortem on the state of Malaysian football, to the Cabinet Committee for Sports Development. FAM’s then technical director Robert Alberts was supposed to have presented his blueprint to the task force — despite having submitted it a  year earlier.

So what happened to Alberts’s blueprint? What were the findings of the 2007 task force?

The two things that have remained consistent over the years are FAM’s inability to explain matters and the national team’s dwindling performance.

FAM has difficulty explaining matters because despite being the guardian of football, it is not on the ball.

It is still unable to explain why we were humiliated 10-0 against United Arab Emirates in a World Cup qualifying match earlier this month, despite the millions spent on the national team and coaching staff over the years.

It is still unable to explain how fans were able to smuggle flares and smoke bombs into the Shah Alam Stadium during the Malaysia-Saudi Arabia World Cup qualifying match.

And it is unable to explain what ‘able’, in the context of hiring a national coach, means.

So FAM, will you ever be ‘able’ to explain anything?

HARESH is executive editor of Malay Mail. He hopes to see changes as we celebrate Malaysia Day today. He can reached at haresh@mmail.com.my or on Twitter @HareshDeol