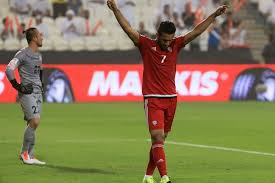 Being Frank
By Frankie D'CruzTHE Malaysia shirt should be a superhero costume, turning people into extraordinary sportsmen.
Instead, we have a bunch of chronic underachievers who malfunction the moment a football match starts.

Yet again, the Malaysian football team has reneged on their duty to the country but then, if the serial losers, their coach Dollah Salleh and the FA of Malaysia think about it, perhaps they will see that they betrayed no one more than themselves.

It is collective suicide. In one corner, we have the FAM that has created a farce; its froth is just a stink bomb that keeps on exploding.

In the other corner, are our national footballers who have never failed to push back the frontiers of the unacceptable.

In the middle is clown Dollah, a former top striker-turned-worst coach ever.

These spoilt lot were left free to do what they liked by their entire hierarchy.

They had no limit, no sense of duty. And it might just remain that way.

To have a terrible football team was already unbearable. To also have the most stupid is intolerable.History will remember the current football set-up as having shown great mastery of national disgrace.The 10-0 defeat by the United Arab Emirates was almost hallucinatory — a psychodrama that will go down as the day Malaysian football was reduced to ashes.

The ‘field of dreams’ of many kids has become the set of a living nightmare. We take those who don national colours to be role models for kids, especially those who have lost their way in life.

But in reality, our footballers are just a bunch of bling-bling show-offs.

Meanwhile, the rest of Malaysia — engulfed by despondency — is dissecting the 10-0 humiliation with the wild excitement of a schoolboy given a scalpel and let loose on a dead mouse in Year Six science.Frankie is editor emeritus of Malay Mail. He can be reached at frankie@mmail.com.my or on Twitter @dcruzfrankie
10-0 being frank dollah salleh FA of Malaysia FAM football frankie d cruz Malay Mail Malaysia national team uae