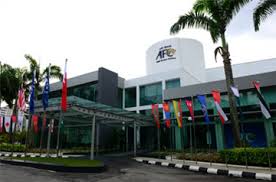 The Asian Football Confederation (AFC) may call itself the guardian of football in this region but it lacks the will to clean up its house in Bukit Jalil.

This was despite promises of reforms which includes transparency, accountability and good governance by president Sheikh Salman Ebrahim Al Khalifa when he took office in 2013.

AFC, run by officials in suits, is good in producing brief statements. But that too has somewhat regressed as they would only speak when asked repeatedly to do so.

It has been almost six months since Malay Mail exposed the ''tamper or hide'' video involving two key AFC personnel. The revelation was published on April 25. It highlighted a video showing AFC financial director Bryan Kuan Wee Hong claiming that former AFC general-secretary Datuk Alex Soosay telling him, “protect me”, before asking, “can you tamper or hide documents which relate to me?” The video was recorded by former Fifa investigator Michael John Pride on July 26, 2012, three days after Kuan met Soosay at the latter’s office at AFC House in Bukit Jalil. Soosay denied the contents of the video, saying it was an attempt to smear him. Kuan refused to comment on the video.

An AFC representative collected a copy of the video on May 11. Two days later, Soosay was suspended as AFC, had in a statement, said it was able to verify the video's authenticity. Its legal department initiated an internal probe. Soosay, however, quit on June 17.

After months of requesting the status of the internal probe, AFC issued a statement yesterday that read: "Following the publication by the Malay Mail of a story earlier this year, AFC launched an internal investigation to establish the veracity of the allegations made in the leaked video from 2012 at the centre of the story.

"Due to the inability to obtain any additional or corroborating evidence to substantiate the claims made in the video, the investigation had to be closed. This is despite repeated attempts by AFC to obtain information. The Fifa investigator, who recorded the video, has so far refused to comment or engage with AFC."

In short, AFC just said let's forget about this and move on.

AFC lodged a report with Cheras police over the theft of documents from AFC House in 2012 — a case that the police are still pursuing. The status of the investigation remains vague. Police were supposed to wrap up their probe on May 13 and hand the investigation papers to the deputy public prosecutor’s office. On June 26, Kuala Lumpur Prosecution Unit head Suhaimi Ibrahim said: “Please check with the IO (investigating officer).''

Suhaimi has not responded to queries regarding the case since. Even the authorities seemed to have moved on.
An AFC insider once asked: "What else do you expect AFC to do?"

Plenty. For starters, they should reveal the findings of its internal investigation. That will show transparency. Secondly, it must show efforts were taken to communicate with Fifa pertaining the matter. It is baffling to note that a former investigator of the world body had a video with damning contents yet nothing was done about it until it surfaced this year. Was Fifa or AFC ever informed of the investigation? Has AFC followed up with police regarding the theft probe? Who will be held accountable for the fiasco?

And to pro-actively address an issue that rocked the region reflects good governance. To issue a statement after repeated requests shows otherwise.

AFC has been dribbling around this issue for far too long, not wanting to tackle any party. It has instead scored an own goal, putting Sheikh Salman's ''transparency, accountability and good governance'' vision to shame.