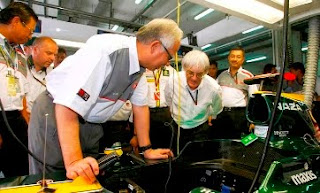 Below is an extract of the report from yahooEurosports. This was also carried by Mailsports.

"Ecclestone derides new teams as 'cripples' and 'an embarrassment'

In an astonishing outburst, F1 commercial rights-holder Bernie Ecclestone has lambasted 2010 newcomers Lotus, Virgin and Hispania (HRT) as 'cripples' and 'an embarrassment' – and accused them of doing 'nothing' for the sport.

The British billionaire's remarks are even more extraordinary given that he played a leading role in trying to attract new entrants onto the grand prix grid this season by way of financial incentives. However, almost eight months on and the best of them – Lotus – is still languishing around 1.5 seconds adrift of its closest rival and some 3.5 seconds shy of the outright benchmark. HRT is regularly more than five seconds off the pace, and none of the three have come even close to scoring points."

This certainly won't go down well with many people. After all, it was Prime Minister Najib Tun Razak who launched the team.

I wonder what team 'owners', Tony Fernandes and friends have got to say about this.