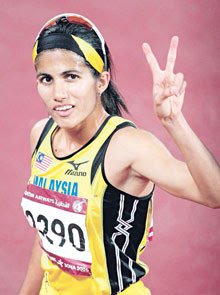 According to Bernama the "Malaysia Amateur Athletic Union (MAAU) blamed the National Sports Council for the delay (in registering) as MAAU had sent Noraseela's accreditation to the Olympic Council of Malaysia on June 20."

And once again the blame game begins.

HD says: Shouldn't Noraseela be the Gajah and not 'politicians'? After all it is the athlete who goes on winning medals right?