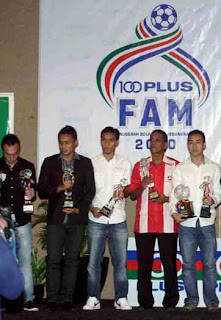 I was at Studio 3 in Astro (Bukit Jalil), in the midst of joining Jason Dasey and Abbas Saad on the weekly Four-Four-Two programme when I got a message from my work mate K.Rajan who informed me that Kelantan coach B.Satianathan won the 100Plus-FAM National Best Coach Award.

I would have loved to see the faces of the FAM officials when his name was announced. After all, it was they who had earlier slapped him with a six months suspension and an RM2,000 fine for speaking against 'policy matters'.

Congratulations to Satianathan and the rest of the winners. Keep up the good work and hoping for a more exciting season next year.


HD says: It's been almost nine hours and I still can't stop smiling.....