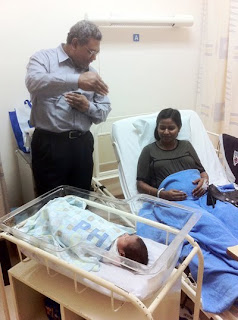 I got an SMS during the Malaysia-Pakistan Asian Games hockey final. It read; "The bald and not so beautiful."

Oh yes, many claimed the national lads could have played better - as evident when the players had more hair. Malaysia won the silver medal after losing 2-0 in that match.

Nevertheless, the fact remains that this team made it to the final - and that itself is a historical achievement.

And I pay my tribute to not only the whole squad, but to national goalkeeper S.Kumar - and my 'letter' was address to his newborn baby boy. Read Dear Kumar Jr in today's Mailsports.
Pic courtersy of malaysianhockey.blogspot.com

HD says: I guess 'Kumar Jr.' will appreciate the contents of the letter better when he's a little older. Cheers!