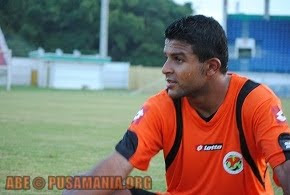 That is what Stanley Bernard (pic) told me just minutes earlier.

Stanley informed me that he has finally been fully paid by MyTeam - through Khairy Jamaluddin - earlier.

I wrote about Stanley's predicament earlier thus I felt it is only fair to credit KJ for making Stanley's Diwali wish come true - despite it being long overdue.

HD says: So Stanley, where are you heading to next season?