Lesson of the day - C is for confusion 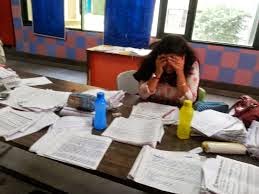 TEACHERS in the country are a confused lot.

But I pity them for they have been placed in a very confusing situation.

I spent several hours with a group of teachers on Monday as they spoke about “clerical work”, waking up at 3am to submit data online and the PT3 which started yesterday.

Here is a gist of our conversation. The school teachers I spoke to teach in three different schools in Kuala Lumpur. Their real names cannot be revealed for obvious reasons.

Haresh Deol (HD): How’s the education scene?
Abu: Messy!
Lim: Concentrate on my tuition centre better
Muthu: Saya menurut perintah.
HD: According to the Teaching and Learning International Survey 2013, Malaysian teachers spend an average of 29 per cent on administrative tasks. What’s that all about?
Abu: Much have changed since we left school. Now there’s E-Operasi, E-Pangkat, E-this, E-that…
Lim: Fed up lah.
Muthu: Let me explain. E-Operasi is for teachers to record daily administrative work to the state department and ministry online while E-Pangkat is for us to apply for a promotion...
Abu: But the internet speed in my school is slow. Some of us rely on our own broadband modems and laptops to get the job done.
Lim: The ministry’s server is always down. Some of us try our luck accessing it at 3am or 4am to log in as it needs to be done within a certain time frame.
HD: It’s the digital era. You need to adapt.
Abu: Sadly, we don’t have the proper infrastructure to adapt.
Lim: I want to teach, not waste time on paper work.
Abu: (National Union of the Teaching Profession secretary-general) Lok Yim Pheng made a valid point in Malay Mail (Monday). She said the ministry approved plans to introduce teaching assistants last year but it has not been implemented till today. Teachers are unhappy with the administrative work. There are even groups on Facebook where they speak about this.
Muthu: It is a noble move, to get things streamlined and done online. But they should have been planned properly. Like the PT3…
HD: So no more PMR and now PT3?
Abu: I’m not for it or against it. I just don’t understand why teachers were not briefed in advance. I’m undergoing a four-day crash course in a school in KL which includes teachers from zone Bangsar, Pudu and Sentul. The ministry is scrambling to conduct courses for teachers nationwide.
Muthu: Many of us are forced to miss classes due to these courses. It would have been better if the courses were organised during the school holidays. In fact, the format and courses should have been done when the current batch of PT3 students were in Form 1 two years ago. It would have given teachers and students ample time to prepare.
Lim: More teachers missing classes would mean more frustrated parents resulting more students coming to my tuition centre. Ka-ching!
Abu: Honestly, most teachers are clueless about PT3. There’s even a petition against PT3 by ‘Kami Mahu SPPBS Dimansuhkan’ on Facebook. Just read the comments there and you will understand the frustration.
Muthu: Who sets the papers? The state department or the school? And some subjects are based on course work where students will be evaluated by their teachers. Lok had advised teachers to be fair in their assessment. But who are we kidding.
(Lok, had on June 15, advised teachers to uphold their integrity by giving marks based on answers given by students instead of giving marks for them to pass the examination)
Lim: Say what you want, people will still send their children to tuition centres as they lacked faith in the education system.
HD: How do we solve this?
Abu: We must plan in advance and provide proper infrastructure and materials to teachers and students.
Muthu: The policymakers should speak to us before implementing new systems. Teachers must be briefed thoroughly. There should not be any confusion, especially among the children.
Lim: Work as school teacher, collect the monthly pay, then go work part-time at a tuition centre. At least can buy a brand new (Kawasaki) Z1000. A bike shop in Batu Pahat is offering government servants loans of up to 20 years and interest rates of only 3.5 per cent per annum! Ah, the perks of kerja gomen…