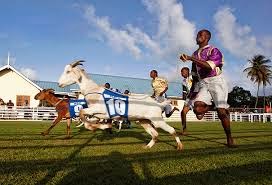 The national hockey team were whacked 8-1 by the English national team before they were given a 4-2 lesson by Trinidad and Tobago in the on-going Glasgow Commonwealth Games.

Naturally, fingers are being pointed at the players and coaches. Some alleged the poor performance could be a form of "protest". Do read '5 euro sehari'.

Others have, typically, demanded for a total revamp.

Here's a question though, why not seek for a total revamp within the Malaysian Hockey Confederation as well?

After all, there are plenty of officials there who CLAIM they are part of the national body but are often no where to be seen and responsibilities remain dubious.

Don't just say the national hockey team has produced a humiliating episode. The officials too are party to this national embarrasment.

By the way, Trinidad and Togabo is famous for its calypso, carnivals and goat-racing (picture).

HD says: Instead of making up excuses and justifying the results on Facebook, try addressing the problem.