Speaking to the homeless: How Danial and his ghosts changed my days 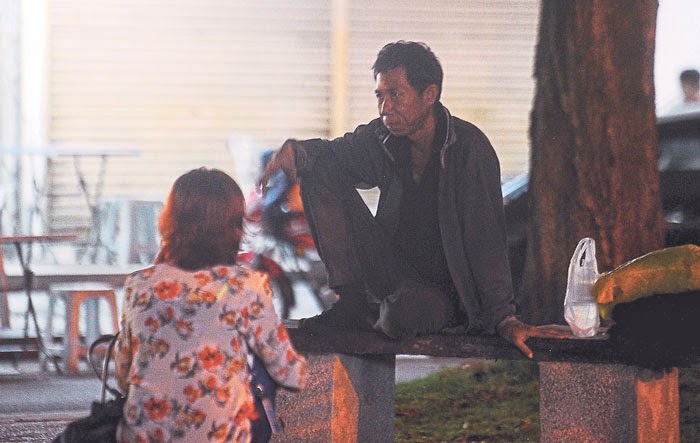 I HAD the opportunity to meet a gentleman by the name of Danial Sum Ping Kan.
My conversation in Bahasa Malaysia with the Kedah-born 55-year-old was brief, but it was enough time to get to know the man who has been living on the streets for the past 15 years.
Lugging around two bags and a piece of cardboard, he sat on a bench opposite the Kechara Soup Kitchen in Bukit Bintang and enjoyed a meal that was distributed by volunteers.
My conversation with Danial was eye-opening.
I sat myself on the grass while he sat above me, looking at me with confusion.
The way he looked and dressed in a windbreaker, t-shirt and slacks, I would not have guessed that he was homeless if I had seen him on the streets.
I started asking him questions about his background. He was initially guarded with his answers, but was eventually comfortable enough to share his story.
Danial spoke of his experiences in the city, including being arrested and detained for six months.
After that, life was a downward spiral for him.
He was not entirely homeless or jobless in the past because he did work odd-jobs as a surveyor, factory worker and lorry driver.
“Life in the city is so difficult. There are ghosts in my head that tells me whatever I do is wrong,” he said. It moved me.
While I lay my head down in the comforts of home, Danial sleeps on the sidewalk of Sungei Wang along Jalan Bukit Bintang.
When it is raining and I am snuggled up in bed, Danial is seeking shelter from the pouring rain.
There are many out there who share the same fate.
Whether it is by choice or forced upon them, there are many homeless folk out there who have to go through the motions of surviving, sleeping on the concrete ground with nothing but newspaper sheets as blankets.
Instead of evicting them from the streets where they call their home, why not shelter them by providing basic necessities like food and water?
It is evident that the only ghost in the city is the rising cost of living that had led to the downfall of Danial and many others like him.
That ghost should be tackled first, otherwise, more of us could end up sharing the same fate on the streets of Kuala Lumpur.
Danial had a smile on his face that I would never expect to see when I handed him two paracetamol tablets.
“I hope this medication will be able to help you when you are not well. I hope it will chase the ghosts away too,” I told him.
Danial smiled warmly and shocked me when he switched from Bahasa Malaysia to English.
“These ghosts have been with me for a long time. Thank you girl, thank you.”
Then we waved goodbye to each other, not knowing if we will ever meet again.
Danial Sum Ping Kan homeless Malay Mail soup kitchen Ushar Daniele