Must we stop laughing – even excessively? 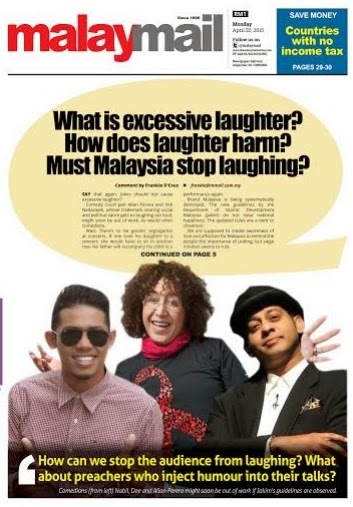 SAY that again: Jokes should not cause excessive laughter?

Comedy Court pair Allan Perera and Indi Nadarajah, whose trademark searing social and political satire gets us laughing out loud, might soon be out of work. As would other comedians.

Wait: There’s to be gender segregation at concerts. If one took his daughter to a concert, she would have to sit in another row. No father will accompany his child to a performance again.

Brand Malaysia is being systematically destroyed. The new guidelines by the Department of Islamic Development Malaysia (Jakim) do not raise national happiness. The updated rules are a dent to closeness.

We are supposed to create awareness of love and affection for Malaysia to remind the people the importance of uniting, but siege mindset seems to rule.

Perera was stumped over the Jakim’s guidelines: “One of the greatest weapons in society is laughter. Even in times of uncertainty, we must laugh together as family.

“The last thing anyone should do is to take away laughter. People in the audience have said we helped them with their pain, even if it was only during our show. That should speak volumes for laughter.”

Perera says everybody has a funny side. Not true. Jakim doesn’t. And it should elaborate what it means by jokes should be “sparing”, “toe the line”, and not make light of serious and mournful matters that lead to “extreme laughter”.

Only those who don’t have humour in their lives don’t indulge in laughter. Their loss. Bottom line: Who is Jakim to tell us how we should laugh?

Why is it those who murder must die while those who kill the spirit of Malaysia go free? Consider — gender separation at concerts is a major knock on the diverse cultures of Malaysia and a threat to communal interaction and democracy.

We wonder what the Tourism Ministry thinks about a family outing for a concert. Especially when the wife and daughter sit in another section.

Let’s not delve into Muslims and non-Muslims. It’s about secular Malaysia never becoming a developed country.

If Putrajaya allows this, Jakim might next extend it to malls, public transport, supermarkets and cinemas. Wouldn’t these impact non-Muslims?

We don’t need anyone to police our ordinary daily lives and prey on our consciousness. We want to enjoy the beauty of literature, dance and music. We want to embrace knowledge.

It’s about respect, tolerance and trust. It’s about imparting wisdom and developing the future of Malaysia.

Song lyrics that do not contain “goodness and pure values”, in addition to “bringing awareness” and “leading to repentance”, are not it. It’s about the sheer joy of entertainment and not being that unfortunate stereotype certain quarters are trying to create.

The joke is we are losing a sense of humour and failing to accept there’s nothing wrong with laughing at ourselves. In an ego-littered minefield, one misstep can forever alter the interpersonal landscape.
allan perera comedy dee frankie d cruz indi nadarajah jakim nabil