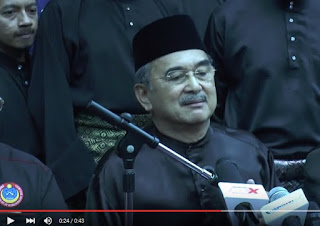 HARESH SAYS
By Haresh Deol
HE swirls effortlessly with strikes that are graceful yet deadly. There was no shouting or screaming, just the sound of the wind accompanying his moves.
It gave me goosebumps as I stood from afar, watching a silat exponent practise his art.
I was drawn to the art of silat in school. The movements — jurus, bunga and belebat — are intriguing and mesmerising.
A martial art that originated from the nusantara (Malay archipelago), silat spread  by word of mouth. It is believed silat was developed through the observation of animal movements and other natural phenomena while scholars declared Chinese and Hinduism elements are evident in the art form, their influence in the region during the early days.
Silat is best associated with legendary warrior Hang Tuah and his four friends — Hang Kasturi, Jebat, Lekir and Lekiu.
It is deeply rooted in Malay culture. Exponents perform their moves during wedding receptions while silat is a common feature in most festivals and traditional shows.
Just like taekwondo, judo and karate-do, silat also evolved and became a sport. Pencak Silat is a common feature at the Southeast Asia Games and was part of the 2008 Asian Beach Games (Bali) and 2009 Asian Indoor Games (Hanoi).
In Malaysia, the National Silat Federation (Pesaka) was formed on Sept 24, 1983. Before that, the nation had four silat representative bodies — Seni Silat Lincah Malaysia, Silat Seni Gayong Malaysia, Seni Gayung Fatani Malaysia and Seni Silat Cekak Malaysia.
Pesaka estimates there are some four million silat exponents in the country. The federation categorises silat as culture and sport.
But the line has been blurred in recent weeks.
Pesaka raised eyebrows when they organised the Red Shirt rally on Sept 16. Initially racially-charged, it was later toned down and was described as a gathering to counter the earlier Bersih 4.0 gathering.
However, those who attended the Red Shirt rally were rooted with the Hidup Melayu (long live Malays) theme.
Sports officials were cornered. The Sports Commissioner’s Office, that is supposed to crack the whip on such matters, kept silent.
Olympic Council of Malaysia (OCM) president Tunku Imran Ja’afar expressed shock that Pesaka was the organiser of Himpunan Rakyat Bersatu, as reported by this newspaper on Sept 13.
Even more disturbing for the Negri Sembilan prince is that his vice-president Datuk Megat Zulkarnain Omardin was at the forefront of the gathering. Megat Zulkarnain is Pesaka secretary-general.
He insisted Pesaka had every right to organise the gathering as they wanted to promote “peace” despite allegations the gathering was politically motivated.
Tunku Imran apparently had a word with Megat Zulkarnain about the matter and had hoped such actions would not happen again. But it did.
Pesaka president Tan Sri Ali Rustam, was widely quoted during the launch of Wisma Silat Gayong in Kuala Lumpur on Sunday, as saying the “national body is ready to go to war if need be to defend the dignity of Malays and its leaders”.
Tunku Imran, who is currently in London, would not be pleased. OCM secretary Datuk Low Beng Choo was clearly unimpressed.
“It was pointed out (to Pesaka) then (right after Himpunan Rakyat Bersatu) that we cannot condone such things but if it happened again, we must look at this matter seriously,” she said.
“OCM’s stand is very clear, sports associations should not get involved in politics.”
Sports is supposed to be race, religion and colour-free. It is a unifying force, allowing you and me to stand on a level platform.
People are judged based on their sporting capabilities, not on who they know or their association.
In Malaysia, sports is often seen as a perfect venue to garner votes, especially from the youth. This explains why many politicians are eager to hold positions in sports associations.
Sports in this country has been politicised so much that those contesting in Kelantan during the last general election promised the state a new football stadium, clearly taking advantage of the popularity the Red Warriors enjoy there.
Pesaka is, after all, being run by the former Malacca chief minister. Whether such loyalty will earn him a place in the mainframe of politics remains to be seen.
Pesaka has every right to fight for its cause and uphold Malay rights. It has every right to organise gatherings as long as it is in accordance with the law.
But one must agree Pesaka has an identity crisis and must now choose if it is a political organisation or a sporting body.
It cannot and must not be allowed to wear two hats. Those who condone it do not know what sports is all about.