HARESH SAYS: It is the authorities who have to change 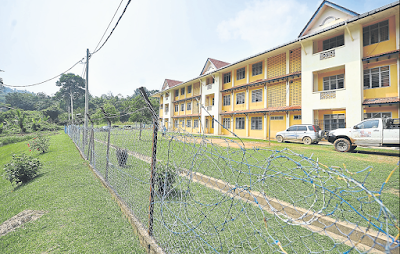 SOME have described them as “lazy” and “set in their ways”. Others say they are a contented lot, happy with their traditional way of life and cannot be changed.

A former school teacher, who taught in a primary school in Gerik, shared her tales of dealing with the community.

“It’s not easy dealing with orang asli children. Most of them are not eager to learn and often skip school. However, the school does not take action as we want to encourage them to stay in school,” she said, requesting anonymity.

“Some of them come to school in slippers, sometimes without uniforms. During examinations, we will coach them to ensure they score the bare minimum.

This is the reality no one speaks about.” The Education Ministry, or at least those administrating schools in the outskirts, know this.

When seven children from SK Pos Tohoi in Gua Musang went missing on Aug 23, the horror tales emerged. Many earlier speculated the children were smuggled across the border, maybe part of a human trafficking syndicate for organ harvesting or child prostitution.

Allegations of students being mistreated in school and teachers who were often missing emerged as the authorities scrambled to do damage control. Parents claim they were kept in the dark while the families staying in the highlands of Kampung Simpul, Kampung Gawen and Kampung Penad, some 50km from Pos Tohoi and only accessible on foot or by four-wheel drive, said police had only visited them once since the tragedy.

It remains unclear if anyone from the school or ministry made an effort to meet them at their villages.

As tough as they are portrayed to be, the villagers cut a sad, dejected look when Malay Mail visited them on Saturday. The world outside sympathises with them momentarily, but will quickly forget they even exist in weeks to come.

The authorities are now going into damage control mode as the incident has precipitated numerous questions — from search and rescue efforts in Kelantan’s dense jungles to the roles played by the warden and teachers at SK Pos Tohoi.

The Education Ministry, in a statement last Friday, said it would set up a special committee to look into the various aspects involving orang asli students staying in its hostels.

Should the rules be any different from any other Malaysians who stay in hostels?

The ministry will also organise training sessions in stages on the orang asli culture and way of life for teachers in such schools.  After 58 years of independence, we are still trying to understand a community that had settled here 8,000 years ago.

Our front page picture on Monday, of workers putting up new fencing around SK Pos Tohoi as the earlier fencing had gaping holes, shows the lack of maintenance at the school — just like our porous Malaysia-Thai border. If not for this tragedy, it is highly unlikely the security concerns at the school would be addressed and the old, rusty fencing would have remained.

One wonders how many other schools and hostels nationwide, especially those in the outskirts, have lax security?

International Trade and Industry Minister Datuk Seri Mustapa Mohamed, who is also the Kelantan Umno liaison committee chairman, was spot-on to say investigations should be carried out on why search and rescue efforts took so long without yielding results.

The blame game will continue. The critics will criticise while the defenders will claim they have done their best. The politicians will do what they do best — make plenty of promises.

A friend said if such an incident had happened in the Klang Valley involving children of wealthy families, everyone would be singing a different tune.

The fact remains, seven school children — regardless of their colour or creed — who were staying in a public school hostel went missing more than 50 days ago. Only two were found alive.

The warden and school headmaster must be held accountable but more importantly, this tragedy occurred due to a failed system. Is it fair that we left them in your care only to see them return in boxes?

The sooner we realise this sad fact and rectify it, the better. Perhaps, it is we who are lazy for not wanting to understand those around us.

And it is we who are set in our ways by simply profiling a certain community.

The authorities failed to address numerous issues leading to this tragedy. As such, it is they who have to change.