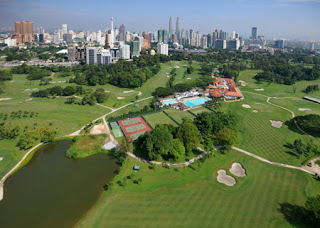 KUALA LUMPUR — The Royal Selangor Golf Club remains tight-lipped over the latest development claim on its high-value land in Jalan Tun Razak.
Its president Tan Sri Yong Poh Kon said the club would only respond upon being informed officially of the matter.
This follows the announcement by Urban Wellbeing, Housing and Local Government Minister Datuk Abdul Rahman Dahlan on Monday that the club will be turned into a recreational park.
"We are aware of the press reports but we'd rather not comment at the moment," he said.
Asked if he was tired with repeated attempts to develop the land, Yong said: "Yes, but we will reserve our comments until we see something in black and white."
Insiders reveal the committee had "deliberated" on the announcement by Abdul Rahman but decided against issuing any statement as of yet.
Abdul Rahman had said while he understood the history of the iconic club, there were no golf courses in city centres in most developed countries, with the site more suitable for a recreational park such as that found in Central Park in New York.
"The proposal is just baffling. There are already three big parks nearby — Taman Tasik Titiwangsa, Taman Tasik Perdana and the KLCC park," said an insider.
Another member said: "We've heard of plans for a highway and condominiums. Now this?
"But club members are divided. Some say the club should remain for historical purposes but others say it is only right for city folk to enjoy the space instead of just the elite few."
The club, then known as Selangor Golf Club, was formed in 1893 and has been at its current location since 1918.
abdul rahman dahlan park royal selangor golf club yong poh kon