October 02, 2015
As published in Mailsport today 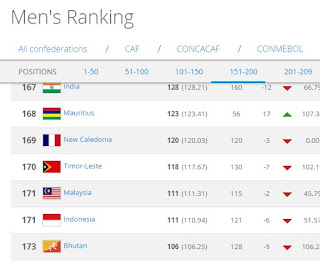 PETALING JAYA — Malaysia are now ranked 171 in the world. Yes, you read that right.

This is the worst performance ever by the national team, further frustrating fans after Harimau Malaya were whacked silly 10-0 by United Arab Emirates in a World Cup qualifier last month.

Malaysia are tied at the spot with suspended Indonesia and remain among the worst performing countries in the region —behind the likes of the Philippines (ranked 134), Thailand (145), Vietnam (149), Singapore (157) and Myanmar (163).

Supporters and stakeholders have taken the FA of Malaysia (FAM) officials to task, stressing they have failed in producing a strong national outfit — despite the millions of ringgit spent over  decades and world-class facilities.

Caretaker coach Datuk Ong Kim Swee is well aware of the sentiments against the national body and the team. To him, being placed at the rotten end of the table is disappointing.

“I know what is being said (against FAM and the team), especially on social media. Even if I am not in the position (caretaker coach), I would still be hurt over our latest ranking,” said Ong, who replaced Dollah Salleh.

“But there is no point in looking back. I’m not trying to run away from the responsibility but let’s look at the facts. We’ve not won a single match since the start of the year. And I say this with no disrespect to Dollah (Salleh).”

He is determined to improve the ranking, starting with an international friendly match against Laos in Bangkok on Oct 8 followed by a World Cup/Asian Cup qualifier against Timor Leste in Dili on Oct 13.

“It’s not going to be easy but we have an opportunity to redeem ourselves in the two matches. The players know it and are eager to collect points.

“I just took over this position, I didn’t ask to be placed here. But I’ve been given a task and I’ll try my best.”

Ong’s words may pacify the fans to a certain extent, but the dumbfounding silence by FAM officials continues for reasons they know best. At 171, they have humiliated the nation and must be held accountable.
171 FA of Malaysia Fifa football haresh deol Malay Mail Malaysia