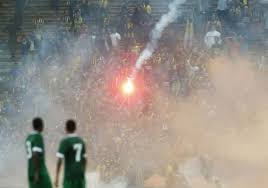 KUALA LUMPUR — Ultras Malaya insisted they were not to be blamed for the heavy punishment meted out by Fifa against the FA of Malaysia (FAM) following riots at the stands during the World Cup/Asian Cup qualifier between Malaysia and Saudi Arabi on Sept 8.
Its leader Alfadli Awaludin, popularly known as Rambo, said critics ought to look at the root cause of the incident at Shah Alam Stadium instead of playing the blame game.
Fans had launched flares, smoke bombs and firecrackers onto the pitch in the 88th minute of the match to vent their frustration following Harimau Malaya’s 10-0 defeat to United Arab Emirates in a previous qualifying match. Fifa handed FAM a 40,000 Swiss francs (RM180,000) fine and a warning. The Sept 8 match was also awarded to Saudi with a 3-0 score.
“If anyone thinks the Ultras are to be blamed, then they are being very shallow about the situation.
“Have they asked why the fans reacted in such a manner?” asked Alfadli, 33.
“It is always easy to go after the fans than to find the root cause of the problem. That is the biggest problem with Malaysian football.”
Alfadli also denied claims their actions on Sept 8 was to get Fifa to ban FAM.
“Name me one statute or regulation that says crowd disturbance or rioting will see a national association banned. Fifa can only suspend if there is government interference. Unless the Youth and Sports Ministry interferes, FAM will continue to operate.”
Ultras continued to be critical over the national body, blaming its officials for the deteriorating performance of the national team and Malaysian football. The 10-0 humiliation was the worst performance by Harimau Malaya, which saw coach Dollah Salleh resign.
In the latest Fifa ranking on Oct 1, Malaysia was placed 171 — its worst position to date. The fanatic supporters had demanded intervention by various parties, as evident on social media, to help save Malaysian football.
Alfadli said Ultras Malaya members were unperturbed of not being allowed to watch Malaysia play UAE at home on Nov 17. Fifa ruled the match be played in an empty stadium.
“It’s fine. If anyone claims they have been deprived the opportunity to watch Malaysia play, go watch a Malaysia Cup match.
“Some players and officials may think they don’t need the fans. Well, the fans are here not to support individuals but the team.
“We will continue to do so, even after some of them retire. The fans are here to stay,” he said.
FAM Fifa fine football Saudi Arabia sept 8 uae ultras malaya united arab emirates