October 25, 2015
As published in Mailsport today
By Haresh Deol
haresh@mmail.com.my

PETALING JAYA — The match between Indonesian club Persib and ‘Malaysia All Stars’ continues to hog the limelight with Asian Football Confederation (AFC) wondering how it could take place while former Kelantan defender S. Subramaniam lodged a police report yesterday after his picture was used to promote the game. 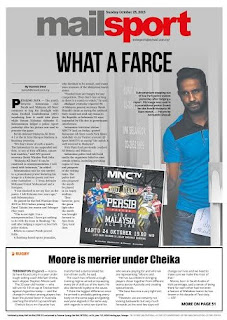 Persib defeated Malaysia All Stars 4-1 at the Si Jalat Harupat Stadium in Bandung yesterday.
“We don’t know of such a match. The Indonesian FA are suspended and they, or any of their affiliates, cannot host matches,” said AFC general secretary Datuk Windsor Paul John.
“Malaysia All Stars? It can be construed as misrepresentation. I will check with Indonesia,” he added.
Subramaniam said he was alerted to a promotional poster featuring his image in a Kelantan jersey and two other footballers — T-Team defender Mohamad Faizal Muhammad and a foreigner.
“I was shocked to see my face on the poster. I left Kelantan two years ago,” said Subramaniam.
He played for the Red Warriors from 2010 to 2013 before joining Johor Darul Takzim last season and Selangor (this year).
“This is not right. It is a misrepresentation. I have got nothing to do with the team in Bandung,” he said after lodging a report at Sea Park police station.
Efforts to contact Persib proved futile.
A Bandung-based sports journalist, who declined to be named, said many were unaware of the Malaysian team’s status.
“Football fans are hungry for any competition. They don’t care as long as there is a match to watch,” he said.
Mailsport yesterday reported FA of Malaysia general secretary Datuk Hamidin Amin as saying the national body would not send any teams to the Republic as Indonesia FA were suspended by Fifa due to government interference.
Indonesian television station MNCTV had, on Friday, quoted Malaysian All Stars coach Nick Sham Abdullah via its Twitter account (@Sport_MNCTV) as saying “the match is well received in Malaysia”.
Nick Sham had previously coached NS Betaria and Malacca.
Indonesian police had told local media the organisers failed to meet certain criteria, including providing copies of visas and passports of the visiting team. The police had also proposed the match be played in an empty stadium.
They, however, gave the green light after the match was brought forward to 4pm from 7pm, local time.
Asian Football Confederation Datuk Windsor Paul John FA of Malaysia football Malay Mail malaysia all stars persib S. Subramaniam