HARESH SAYS: When ignorance is not bliss 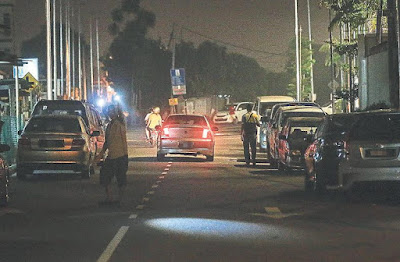 SHOUTS of “abang, abang” broke the silence as I walked away from my car.
Mr Muscular, on his kapchai minus a helmet, came racing from the other end of the road while trying to get my attention. I knew what was coming.
I had, just past midnight on Saturday, parked my car at Spectrum shopping mall in Bandar Baru Ampang — the small-time mall that was recently made famous by the Red Shirts for their so-called “Save Selangor” rally.
Unlike most days where the parking bays would be relatively empty after working hours, the area was congested as many had parked there to join the Nine Emperor Gods festival at the nearby Kau Ong Yah Temple.
“If you park here, you have to pay RM5,” he said rather authoritatively.
I smiled and told him it was a public parking space.
“Who is the authority issuing the tickets? Did Ampang Jaya Municipal Council approve the collection?” I asked.
Mr Muscular quickly changed his tune. He said I had a choice to either pay the RM5 or not.
“Two days ago, a Mercedes Benz was broken into. The temple officials got my friends and I to help secure this place to ensure the vehicles are safe. If you don’t want to pay, it’s fine. No hard feelings,” he said.
He refused to acknowledge if he had the council’s approval to collect payment and was eager to join his friends who were luring motorists to park at the empty bays.
As I drove off later, many others motorists were seen forking out RM5 with minimal fuss. Perhaps it’s no big deal to them.
The drive along Jalan Merdeka heading towards the temple was like getting stuck on a road when a pasar malam is about to set up. There were so many people walking about while traders set up stalls along the road, hoping to make a quick buck.  Several People’s Volunteer Corps (Rela) members were seen directing traffic.
The nearby food court, Restaurant 113, extended its operation hours and had placed additional tables and chairs to cater to the large crowd.
Right after the food court, more “jaga kereta” boys were seen. Armed with torchlights, they were directing vehicles to park along the nearby roads and charged the same amount — RM5.
Several friends, who visited the temple recently, were not pleased how certain people had been cashing in on a religious activity. They claimed if indeed the temple had hired these people to charge for parking, then it was only right for the temple authorities to inform visitors.
They demanded transparency, wanting to know if their RM5 “donation” would be put to good use. But they strongly felt these individuals were abusing the temple’s good name.
Were the local council aware of such activities? Did they give approval? How can a group of people suddenly demand money from motorists who park in public spaces?
The festival is huge among the community. Some come as far as Singapore and Thailand to join the annual nine-day celebration,  which sees devotees walking on fire and people lining up to pray in the incense-filled temple.
Thus, it comes as no surprise that some people were eager to cash in. As the festival ended yesterday, one wonders the amount of money collected from the visitors. RM5 may be small for a motorist but multiply it by the thousands who attended throughout the nine days, it would be safe to say those “parking boys” made RM100,000, if not more.
And they made their money thanks to the ignorant many.

When ignorance is not bliss

The typical saying goes — the more filthy the stall or restaurant is, the better the food. I, for one, cannot understand how some people can sit at an eatery where cockroaches roam freely as flies park themselves on the trays of food. The rating card issued by the local council that usually hangs behind the cashier is a joke — nothing reflective of the A, B or C grading.
But people continue to flock to such joints. They claim it is cheap. Others say they are not fussy and would continue enjoying their favourite fried noodles or naan there.
When news of 32 typhoid cases hit the headlines yesterday, many remained ignorant. Some were clueless as to what typhoid is while others downplayed it.
In fact, seven cases were reported with the Federal Territory Health Department in the first week of August. One wonders why the authorities took two months before breaking the news.
Typhoid fever can be contracted by consuming food or water contaminated with excreta from an infected person. The symptoms include abdominal pain, fever, headache and fatigue. Severe cases of typhoid fever can lead to brain malfunction, shock, as well as bleeding and perforation of the intestines — leading to death.
The ministry had urged people to always pay attention to the cleanliness of food and drinks consumed to avoid infection.
Restaurant operators should take the cue by making sure their premises are clean. Patrons must demand to eat in a clean environment, regardless if they are at a stall or a five-star restaurant.
However, our ignorant lot would continue eating at a rat-infested eatery just because “the food is good”.