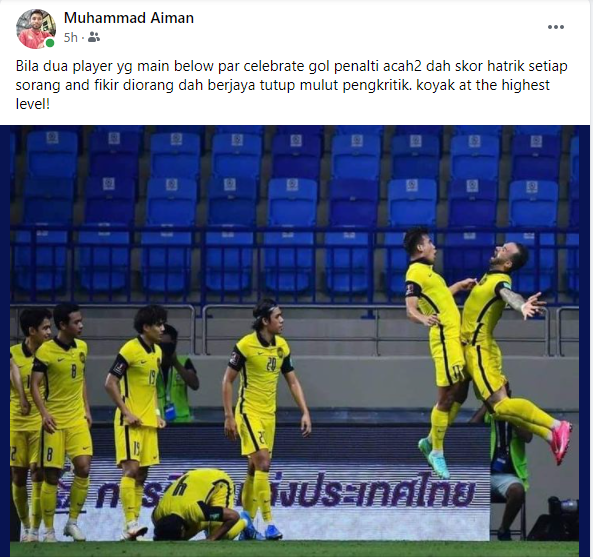 Much has been said about Harimau Malaya's performance in the Asian Cup / World Cup qualifiers. Malaysia ended its campaign in UAE with a 4-0 defeat to the host team, lost 2-1 to Vietnam and managed to edge Thailand 1-0.

Football journalist Muhammad Aiman posted the picture above on his Facebook page. It's that of Safawi Rasid and Guilherme de Paula Lucrécio celebrating  after the former scored from a penalty against Thailand.

Some called the celebration "over-the-top". Others said the fans are just being overly critical about everything these days.

Perhaps the fans made the celebration into a big deal as they assumed Safawi had taken a swipe at those who comment (read: criticised the national team) on social media, just before he leaped into the air.

De Paula's celebration after scoring from the penalty box against Vietnam also came under fire.

Celebrations aside, I was joined by Padang Bola Sepak's Khalilul Rahman (or better known as Khal) on BFM earlier this week. We spoke about naturalisation - a quick and easy fix?

To me naturalisation is never seen as a long term plan. Also, let's not get carried away with our comments that we end up being racist. An athlete, regardless of his or her origin, should be judged based on his or her performance on his pitch.

I also highlighted the need to have more conversations about the grassroots. No point wondering why the top has remained stagnant over the decades as there has not been much emphasis on what happens in schools or in the communities. Football, or sports in general, is never about the elite few. It's always about getting everyone involved en route to creating a massive pool of talent.

Speaking about the elite, now there's a member of the royal family who is keen to return to the FA of Malaysia - to be "in charge of the national team".

Twentytwo13's executive editor Graig Nunis, had yesterday, highlighted the fact that Tunku Ismail Ibrahim has achieved a lot with Johor Darul Ta'zim - a team once known as PKENJ FC that was founded in 1972. 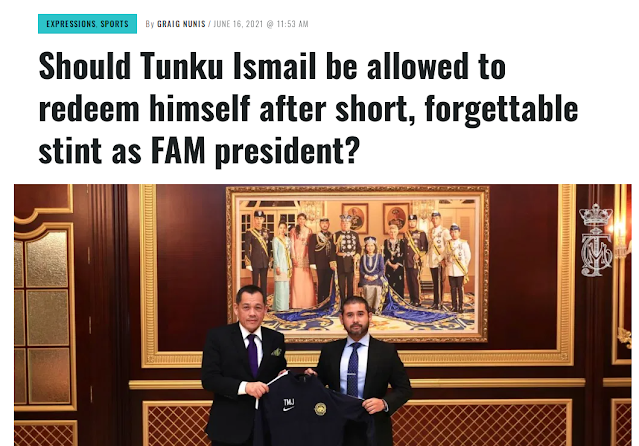 Graig also pointed out that Malaysia was at its worst in the Fifa ranking during Tunku Ismail's brief tenure in office. The 2017/2018 team was a byproduct of development plans that were put in place decades earlier.

You reap what you sow.

What caught my attention nevertheless is what Tunku Ismail had posted on Instagram - that he "controlled the access the (JDT) team from media, journalists, companies and even players' use of social media."

Guess even as professionals, Tunku Ismail has revealed that the players need to be told about what they should and shouldn't do - even on social media - so that they stayed focused on their job.

Also, it will be interesting to see how the national body responses to Tunku Ismail's offer. After all, FAM has been "royalty free" since 2018.

And will Tunku Ismail leave JDT if he was to be put in charge of the national team?

Let's discuss the "over the top" celebrations, naturalised players and TMJ's offer to return to FAM. Football, after all, belongs to all.