Naturalised, heritage, local - so who should represent Malaysia? 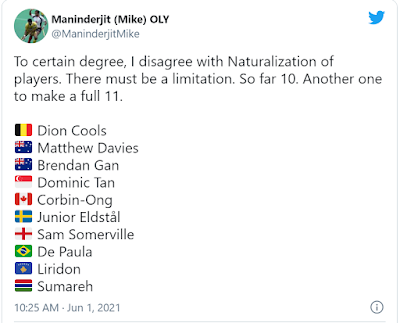 A naturalised athlete is one who is not born in the country but has been given citizenship and can now don the national colours.
A heritage athlete may be born and raised elsewhere but has one parent who is a citizen of the country where he is able to don the national colours.
Now all this depends on the policies of the governing bodies. In Malaysia, or specifically football, we have naturalised footballers and heritage footballers.
Last but certainly not least are the local athletes.
Below is a tweet by ex-hockey international and Olympian Maninderjit Singh.

To certain degree, I disagree with Naturalization of players. There must be a limitation. So far 10. Another one to make a full 11.

This reminds me of an article written by a good friend John Duerden published yesterday:

What do you do when investments in youth development will not bear fruit until, it is thought, the end of the decade and the current crop of players are not good enough to qualify for the 2022 World Cup? China have gone down the naturalisation route.

The team would have beaten Guam on Sunday without Brazilian-born players Elkeson and Alan Carvalho but with China eight points behind Group A leaders Syria, coach Li Tie (formerly of Everton and Sheffield United) was taking no chances. The pair contributed three goals in the 7-0 thrashing of Guam in Suzhou. Fernando Henrique was not fit to play but the former Flamengo winger will be hoping to play some part in the upcoming games against Maldives, Philippines and Syria.

Elkeson, now known as Ai Kesen, was called up by Brazil for a 2011 game with Argentina but didn’t make the pitch. The 31 year-old arrived in China in 2013 and has been one of the most consistent imports ever since. In 2019, after meeting FIFA’s five-year requirement of being in the country, he became (a) Chinese (national).

There has been some disquiet among fans and Chinese football figures about the whether this short-cut in the chase of success is worth it. If they can take China to Qatar next November however, there won’t be much grumbling.

I'm also reminded of this article that appeared in The Atlantic:

Take pole vaulter Giovanni Lanaro. He was born, raised, educated, and trained in southern California, but in Rio he’ll be competing for Mexico. While he is an American, his mother was born in Mexico, and the Mexican national team only requires that you have Mexican heritage in order to compete for them.

“What's wrong with being proud about competing for Mexico?” he told the Los Angeles Times. “I don't see anything wrong with it.”

So where are the locals?

They are around. It's just that we have to unearth them and push them to become among the best in the region, if not world. No push, no stars - it's as simple as that.