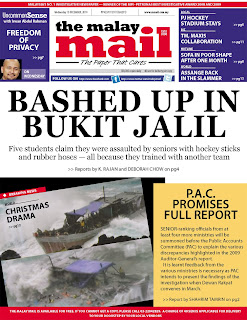 Some hockey junior players claim they were attacked by their seniors for training with a rival team.

I know we used to have former internationals who excelled in two different sports. Are the seniors trying to do the same by being hockey players and wrestlers?

A coin has two sides, so I'm pretty sure the seniors will have their 'reasons' for such actions.

Read all about it in today's The Malay Mail .

Nevertheless, violence can never be condoned - and sportsmen should know better. But before we jump the gun, let's allow the Police to investigate the matter.

Meanwhile, there will be cheers for hockey enthusiasts as the PJ Stadium is here to stay.

HD says: There are better ways to solve a problem then bashing someone up.