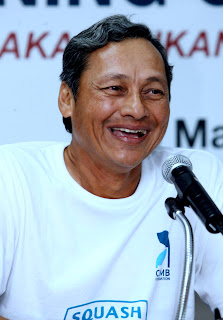 DATO' A.SANI KARIM STEPS DOWN AS 6th PRESIDENT OF SRAM

After more than sixteen years of involvement in Malaysian squash, the last six years as President of SRAM, Dato' Sani officially announced at SRAM's Management Committee Meeting on 6 November, 2010 that he would not be seeking re-election at SRAM's forthcoming AGM on 5 December, 2010. He also announced that he had nominated his very able Deputy for the last six years, Dato' Syed Mustaffa Syed Ali, as his replacement. He further announced this at a dinner function to honour Dato' Nicol David on her Gold medal win at the New Delhi Commonwealth Games and it took everyone there by surprise.

During the period of his involvement with Malaysian squash, Dato' has demonstrated exemplary leadership and keen insight across the full range of squash activities. We will miss him.

The above was the first three paragraphs of an email which I just received minutes ago. It confirmed Sani Karim stepping down as SRAM president. I bet this will be music to some people's ears.

I don't see the need of republishing the whole email, as it is just short of several paragraphs to being a book!


HD says: Best of luck to the new leader.