Of lasers and tickets... 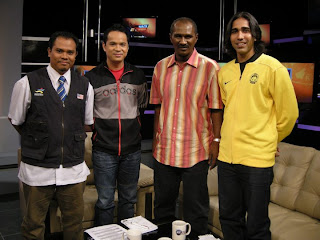 Well the heat is on, as far as the Indonesian camp is concerned.

While the Republic will fly to KL for the first leg AFF Suzuki Cup final at the National Stadium in Bukit Jalil on Sunday, they have already issued a warning - one laser beam and they walk out. Read it here.

Meanwhile, former Mailsports journalist Rizal Hashim, who is currently the resident blogger for Astro Arena's Kafe Sukan (Ch 801), mentioned on the show that the selling of tickets in KL should be monitored with a majority percentage restricted to Malaysians. Joining him on the show was former international Zainal Abidin Hassan - who skippered the national team at the 1996 AFF final which Malaysia lost to Thailand 1-0 - and yours truly.

But the Indonesians believe they can fill half of the stadium. Read here.

Pix taken without permission from Rizal Hashim's facebook - (L-R) Rizal reliving his school days as a class monitor, host Akhbar Sahari who is an ardent Land Rover enthusiast and drives a 17 year old monster, Zainal who made it in time for the show having rushed from his restaurant in Shah Alam and the author.

HD says: It's going to be a dramatic finale.