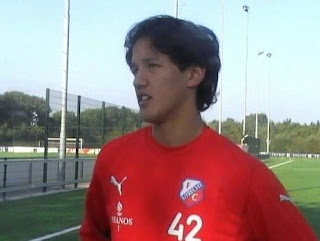 Once again I am not able to travel to Indonesia for reasons best known to the company.

I missed the antics of the Indonesian supporters who apprently boo-ed during the Negaraku was played. I was not able to see the faces of the Indonesian fans when a Norshahrul Idlan Talaha scored the opening goal thanks to a brilliant pass by Safee Sali.

I also failed to see the post-match celebrations and how K.Rajagobal answered the questions posed by Indonesian journalists during the press conference.

I do enjoy good relationships with several Indonesian and Indian journalists but they can be very hard hitting in their articles. I'm sure Rajagobal and Co would know that by now.

But what surprised me the most is that Manchester United's Rio Ferdinand watching the match as reported here. Whoa...

And it looks like Indonesia has found its new poster boy - Irfan Bachdim (pic).