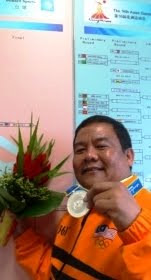 The Prof has been cued out.

To his defence, Chin was instrumental in the formation and early days of the national body. We had a string of world class players including Sam Chong.

Honestly, we still do have calibre cue artists on the green baize.

Among them are the Sabahan pool maestro Ibrahim Amir who stays in Taman Kosas, Ampang, former Asian Games junior Moh Keen Hoo who has just recently turned into daddy Hoo, my Kampung boy Lai Chee Wei (who hails nearby Aulong, Taiping) and the man with a few words who could pass off as a big timer from Klang but is actually a humble and nice young man from Penang Thor Chuan Leong.

Sadly, the association have been in shambles over the years. Perhaps the lack of proper management. The national squad has been 'coach-less' since Sam Chong quit after the disappointing outing at the 2005 Manila Sea Games. Its secretary Melvin Chia has been helping the boys instead, but he has been tied down with his own business.

What about non-existing affiliates that are still represented by its 'members' within the national body? And the need of holding meetings on a regular note? Hmm.

Nevertheless, leaving the players to fend on their own isn't such a bad idea after all. They have been doing well in the local circuits but it's high time to push them into the international scene.

The National Sports Council (NSC) has not been very generous in spending money on snooker. This despite Keen Hoo securing the country's 64th gold medal at the Korat Sea Games in 2007 and Ibrahim potting the nation's first silver medal at the recent Asian Games in Guangzhou.

But then again, why must we be so reliant on government agencies. It's time for Malaysian sports to be liberal and scout for their own sponsors.

Our snooker players can be world class players. If only they were guided properly.