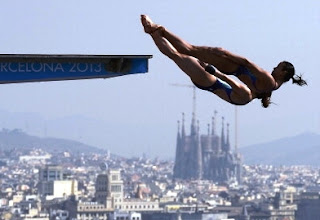 Pandelela and Mun Yee bagged the bronze medal in the Spanish city known for its football team while the famous La Sagrada Família serves as the backdrop for the world competition.

The Malaysian duo repeated their efforts in 2009 when they also won the bronze medal in the same event then.

The other two Asian teams who made it to the finals are the divers from North Korea (placed 9th overall) and neighbours South Korea (11th).


On Monday, the national archers came in second after losing 209-203 to Mexico in the recurve men's team final at the Archery World Cup Stage 3 in Colombia.