Sex in the city 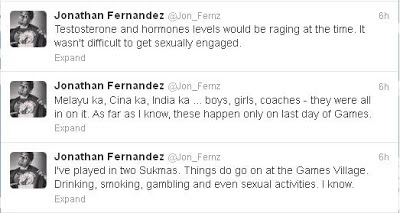 Those were the tweets of a good friend Jonathan Fernandez, whom I had the pleasure working alongside during his stint with The Malay Mail several years back.

For the record, Jonathan has participated in the Malaysia Games (Sukma) in the past.

Meanwhile, 'Haresh Says' - as published in The Malay Mail today - speaks about 'Sex in the city'.

"Hosting the Sukma is not a birthday party.

Just like the conversion of a minor Bill and the proposed implementation of the Goods and Services Tax (GST) that have courted debate recently, proper groundwork should have been done by the powers-that-be. They must think thoroughly and leave no stone unturned.

But we tend to take things for granted, relying on what little we know and only react when an unfortunate incident happens.

Sadly, some will treat it as another day in office only to return home to watch reruns of Sex and the City."