Perak stadium in the pits 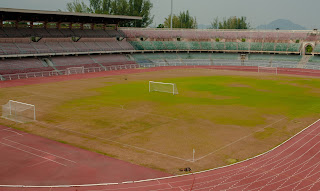 It looks like Perak coach Azraai Khor Abdullah has a new job scope - watering the field at the Perak Stadium.

The field has not been watered properly, as revealed on the backpage of the The Malay Mail today.

I obtained confirmation from Azraai over the poor condition of the field as the team gears up for the Malaysia Cup.

The Malay Mail's reporter Fernando Fong, who is based in Ipoh, meanwhile observed that the field is in a poor state. He added the stadium is not maintained properly and there were rubbish everywhere.

As the stadium is managed by the Ipoh City Council, it was only right to seek clarification from them.

Ipoh Mayor Roshidi Hashim promised swift action. After contacting his staff, he returned my phone call and admitted the council had overlooked the matter and promised to carry out rectification works.

"I must thank people like you and the Media generally for highlighting such matters to us. Sometimes such matters are not brought to my attention and we must ensure all facilities are in good order," Roshidi said.