However, reports leading up to the anticipated clash have not been pleasant.

A confusion over an event by a sponsor of the team led to a stand off between the local Press and the respective party organising the do, as seen in this commentary 'Hello, the British colonial days are long over'.

"It is learnt there was an argument between Chelsea and FA of Malaysia officials regarding some signed memorabilia during a meet-the-fans session.

Some of the Chelsea officials were extremely rude to Harimau Malaya manager Datuk Seri Subahan Kamal, telling him indirectly where he can stick his request. Subahan is also FAM’s vice president.

Chelsea CEO Ron Gourlay, however, later apologised on behalf of the club."

The Sportswriters Association of Malaysia president Ahmad Khawari Isa, meanwhile, had this to say; 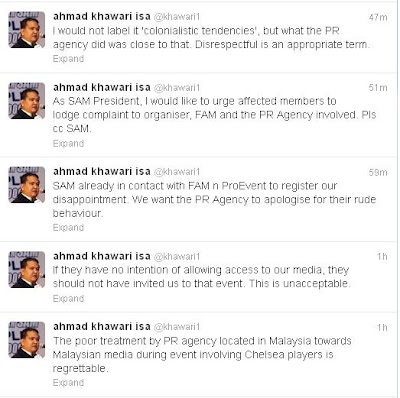 It remains unclear if the party involved has issued a statement regarding this matter.