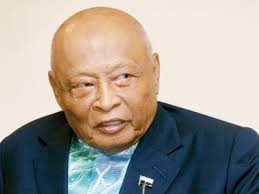 Football Association of Malaysia (FAM) president Sultan Ahmad Shah (pic) has described the failure of Harimau Muda A to defend their SEA Games gold as a normal part of sporting life.

Sultan Ahmad said all parties should play their respective roles and cooperate in studying the weaknesses of the national team, so that the performance of the team, coach by Ong Kim Swee, could be improved.

Harimau Muda A not only failed in their mission to defend the gold medal won in the Indonesian SEA Games two years ago, but also missed the chance of bagging the bronze medal after losing 1-2 to Singapore in the match for third and fourth placing yesterday.

Thailand bagged the gold medal, dubbed the “mother of all medals” after defeating Indonesia 1-0 in the final yesterday.

"This is football, there must be a winner and a loser. For Harimau Muda A, I can accept their failure with an open heart.