'Nice guy' Raju a gem of a football man 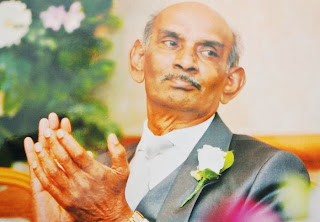 As published in The Malay Mail today

HE was a man who played an instrumental role in Malaysian football.

Yet, little has been heard of Raju Nagalinggam (pic).

The former school teacher turned football expert who later became a legal eagle, Raju was the first Malaysian to have obtained a football coaching licence from Fifa in 1969.

Born on Aug 10, 1940, in Butterworth, Penang, Raju had,   during his younger days, represented Kedah in football and athletics.

He went on to teach St Michaels, SMK Keat Hwa and Sultan Abdul Hamid College in Kedah before he was posted to Kuala Lumpur in 1968.

Raju then left the Education Ministry to join the Sports Ministry as a sports officer.

He spent four months at the Fifa academy in Japan to obtain his coaching license and later underwent a one-month course in Lilleshell, England to obtain the full coaching licence the same year.

He was then appointed as coach for the national youth team and was later made the national director of coaching. Among those Raju coached were Datuk Soh Chin Aun, M. Chandran and Bawandi Hiraral.

“He coached us during our younger days but was well remembered as a coaching director. He was someone that had contributed significantly to local football,” said Soh.

“He was very sincere in whatever he did. There were times when he used to get frustrated but he knew what he was doing and he wanted only the best,” said Rahim.

Former player Datuk M. Karathu pointed out Raju was the first Malaysian to obtain a full coaching licence from Fifa.

Sadly, little has been documented about Raju’s achievements during Malaysia’s heydays in football.
Raju died on Dec 11 after suffering a short illness. He was 73.