In the soup over new regulations 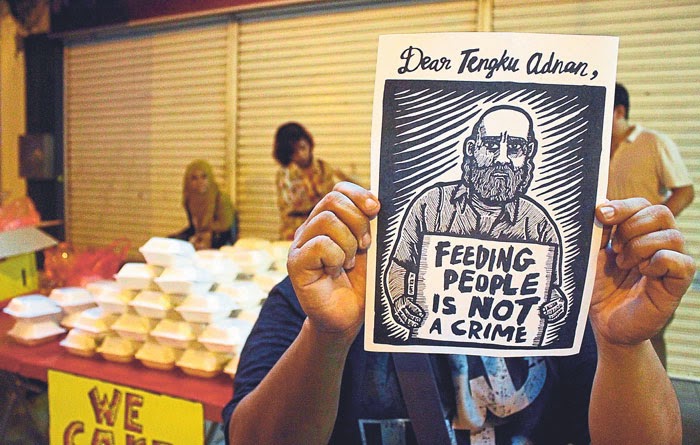 My wife complains I hardly shower her any PDA (public display of affection).
“If you’re too shy to even kiss me on the cheek, at least hold my hand lah,” she said when we were shopping at KLCC two days ago.
In my defence, I argued I was merely following what former KL mayor Roslin Hassan had told BBC in 2006, that couples in KL should not kiss passionately in public. Also in 2003, the Federal Court had ruled City Hall officers were right to prosecute Ooi Kean Thong and Siow Ai Wei for holding hands and kissing at the KLCC park.
I almost got hammered with her high heels.
And I am sure many people would have felt like hammering politicians and ministers over their ridiculous comments made regarding the whole soup kitchen fiasco.
Much has been said about it. Most made their feelings heard in cafes and over social media after Federal Territories Minister Datuk Seri Tengku Adnan Tengku Mansor said soup kitchens would not be allowed to operate within 2km radius from Lot 10 in Bukit Bintang.
He said a “one-stop centre” would be set up and that those who begged or gave alms to beggars would be fined.
Some claim feeding the homeless and needy would “make them lazy” while others said the efforts by soup kitchen operators were deemed “dirty” and a waste of money.
Wouldn’t taxpayers’ funds be used to establish the centre and maintaining it? Who will get the contract to build the centre and provide food and other items?
Since we’re on the subject of money, do clarify if it is true that several City Hall officers and its dance troupe had embarked on a “lawatan sambil belajar” abroad? Do also explain the outcome of the visit by KL Mayor Datuk Seri Ahmad Phesal Talib, his advisers and representatives from Putrajaya and the Federal Territories Ministry to Copenhagen from May 8 to 11?
We tend to create new regulations every other day but no emphasis is made on the current regulations or their enforcement. Spas continue to offer a wide range of “extra services”, burger stalls still operate at sidewalks, cafes are guilty of illegal extensions, restaurants filled with rodents, and jaywalking under a pedestrian bridge is a common sight.
The question many should also ask is how such laws will be drafted?
Was any study conducted prior to Tengku Adnan’s announcement and are City Hall’s enforcement officers trained to differentiate between begging and “trading”?
If a man walked from one corner to the other offering tissues in return for cash, is that considered begging? If I “dropped” RM1 and walked away, is that considered giving alms? Giving alms is part of the five pillars of Islam. Such a charitable act is also encouraged in other religions.
Apparently those who hand out alms will be fined RM150. City Hall will then take the money and offer it to the poor. Which organisation will it go to and can we ensure transparency?
Lawyers have made it clear there are adequate laws to curb begging. Why aren’t they being enforced?
The scenario is made worse when politicians from both divides make unwarranted statements and steal the limelight over something which should not even be an issue in the first place – the kind gesture of handing out food to a fellow human being!
Over and above all, the concept of soup kitchen is colour blind. It showcases unity and togetherness in its purest form compared to the cheesy ministry-initiated advertisements featuring the typical Malay, Chinese and Indian with lame dialogues aired on television.
As rightfully pointed out by my respected colleagues assistant editor Purwaiz Alam and sports editor Graig Nunis, the atmosphere captured when volunteers hand out food truly define the spirit of 1Malaysia.
I promise I will hold my wife’s hands when we go out and give her a peck on the cheek – only because it is the right thing to do.
To all you heroes and heroines who volunteer for the homeless and needy, keep up the good work – for it is a noble thing to do.
As for the politicians … (sigh), what to do!
2km federal territories FT Ministry Haresh Says KLCC Lot 10 Malay Mail soup kitchen tengku adnan