'A pair of shoes would be nice' 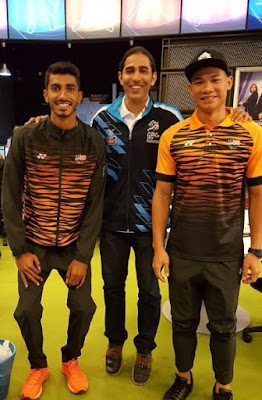 This picture was taken on August 27, when the two SEA Games gold medalists were invited as guests of Astro Arena's Analisis Nadi KL2017.


His victory at KL2017 was meaningful as the last time a Malaysian came out tops in the race was 10 years ago.

And he has since expressed his intention to conquer Asia when Indonesia plays host to the Asian Games next year.

I had, after the show, asked Rayzam - captain of the national athletics SEA Games squad - if he had a sponsor.

The Sabahan replied: "No".

"I get a monthly allowance of RM1,500 (from the National Sports Council). I work for Lembaga Sukan Negeri Sabah and my take home pay is about RM1,200," he added.

"I run because I have to feed my family," he said.

I asked how can anyone help this hero of ours? And said: "A pair of shoes would be nice."

"I train a lot and they wear off easily.

"If I was still single, I can set aside money to buy new shoes regularly but with a family it's a little tight.

The National Sports Council and relevant government bodies can only do so much. Let's not have the football mentality where state associations rely heavily on funds from the state government, thus allowing politicians to hold positions within its system.

And here is where corporate companies can play a bigger role.

It's a shame the Rakan Sukan programme, initiated by former Prime Minister Tun Dr Mahathir Mohamad, died a natural death. It could have been expanded in such a way where corporate bodies not only sponsor associations but also athletes to minimise government expenditure.

After all, tax payers' money could be put to better use on other pressing matters affecting the masses.

On the same day after the Aug 27 show, I had tweeted:

I do hope corporate bodies would see this as a form of Corporate Social Responsibility (CSR).

After all, how much would five pair of shoes cost? Setting aside RM500 for a pair of shoes would translate into a mere RM2,500 a year - which will go a long way for our SEA Games champion and other athletes.

And companies can bank on these stars to be their brand ambassadors.

NOTE: Before anyone starts jumping, this is not a fault-finding exercise and Rayzam WAS NOT complaining about his predicament.
athletics KL2017 Rayzam Shah Wan Sofian Sea Games shoes sponsorship