September 10, 2017
"One more example was the “Tiger” jerseys designed for our sports people chosen to represent the country as a visual identity to help build the competitive team spirit.

The stripes on the jerseys were intended to inspire young people with the spirit of the tiger, a symbol of power and courage, and grow up wanting to wear the Malaysian colours.


Unfortunately, the jerseys were accepted but the spirit behind the stripes was not promoted, and we lost an excellent branding opportunity in sports."

Those were the words of the nation's innovation and design guru Tan Sri Lim Kok Wing.

Conversations in recent days continue to revolve around the just-concluded 29th SEA Games in Kuala Lumpur and the upcoming Asean Para Games which starts on Sunday.

A topic that intrigued me was our national contingent's attire.

The design of the outfit has "evolved" since the 1989 SEA Games in Kuala Lumpur - as documented in this article of mine 'National attire saga continues' published in 2015. Lim was instrumental in coming up with the tiger stripe jersey in 2005.

The once bold tiger stripes have since been reduced to "mere scratches", as some pointed out.

The stripes, meanwhile, are missing from the jerseys used by our athletes during competition.
The hunger to create a "fashionable" outfit overshadowed the main reason behind the tiger stripe creation — to instill the symbol of power and courage not only among our athletes but to all Malaysians.

The powers-that-be did not pounce on the vision behind the design and failed to explain its concept to the masses.

The idea of the design was beyond sports.

It was to also cultivate the love for our national icon - the Harimau Malaya - especially among the young. It was also to encourage Malaysians to embrace the spirit of the tiger.

As Lim once said: "We could have the tiger promoted among schools to instill love for the tiger so young Malaysians would grow to see it as a symbol of courage and embrace it. It’s a happy idea for parents to say, ‘you should be one of the tigers’. It’s the spirit we want to capture.” 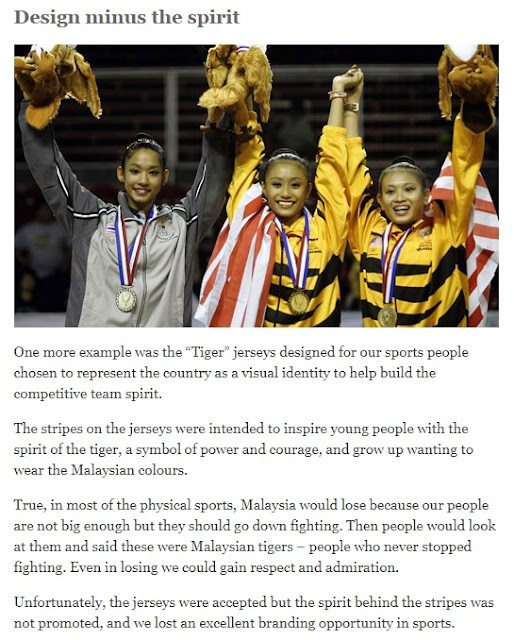 Not many are able to see beyond and think out of the box.

The main mantra behind branding is consistency. To succeed, branding exercises must include the young.

Decades of branding initiatives have seen names like Milo, Panadol and Pampers cementing their reputation and existence in the minds and hearts of millions, as words like chocolate malt, paracetamol and diapers have since become alien to many.

The same could have been done with the tiger stripe jersey. If there was consistency, it would eventually become the "uniform" for Malaysians. It would mean that we, Malaysians, are ready to roar and take on anything ahead of us.

It would mean, in the eyes of the world, we are fighters. The strength and courage of the tiger will be synonymous to Malaysia.

Consistency is also paramount when it comes to initiatives and campaigns by the government.

We have seen how policies and initiatives, especially by several Youth and Sports Ministers (Asian X-Games, women in sports, sports industry), are quickly forgotten once a minister ends his or her term in office.

Hopefully we will soon see the spirit of the tiger resurrected especially among our young — turning them from cubs to roaring majestic tigers of the future.
attire national jersey Sea Games Tiger Stripe