September 30, 2017
Many are quick to label mixed martial arts (MMA) as bloody and gruesome .

But for Shareh Nasrullah Shareh Roselin, the full-combat contact sport has given him a new lease of life.

The 26-year-old, from Alor Setar, Kedah, is among the eight Lekir Fitness & Mixed Martial Arts Academy exponents who will compete in MMA, kickboxing and boxing events in the Ultimate Beatdown at Plaza Sentosa Johor Baru on Oct 7.

Better known as Nasrul "Frankenstein Monster" in the cage, this will be his 10th professional fight (5 wins, 4 defeats).

He shares how he moved away from fighting on the streets to fighting in the cage.

"When I was 13, my parents got divorced. Things weren't the same at home. I wasn't the same.
I started becoming rebellious, skipped classes and fought with other kids. I chose a wrong group of friends. I was a budak nakal.
I dropped out of school after PMR and started doing odd jobs. I was a technician, I sold fish in the market, sold drinks at a hawker stall ... I've done it all, you name it.
I had a really bad temper. I was angry ... with myself and with everyone.
I got married but we went separate ways in 2014. My four-year-old daughter (Nur Medina Danella) now stays with my ex-wife.
Everything seemed to be falling apart.
Last year, I decided to follow some friends to their mixed martial arts class.
Seeing students there throwing punches and kicks excited me. I was eager to be a better fighter.
But I soon realised being a fighter is not just about fighting.
It was about discipline, respect and using my head (thinking).
Instead of fighting on the streets I rather fight in the ring and make a career.
It has turned out to be pretty awesome. I'm more calm and collected now. I'm focused at what I want to do.
I've been competing in several events since.
Earlier this year (February), I became a martial arts coach at Lekir Fitness & Mixed Martial Arts Academy.
I hope to do well at the Ultimate Beatdown. But my biggest goal is to be the first Malaysian to compete in the Ultimate Fighting Championship (UFC) and one day run my own gymnasium.
To those who seem lost or have not set any goals in their life, do try something new. It can be MMA, music ... anything you want. If you face your fears, you will achieve more than what you hoped for.
Just be focused.
It's never easy, but don't give up. Hard work will eventually pay off." 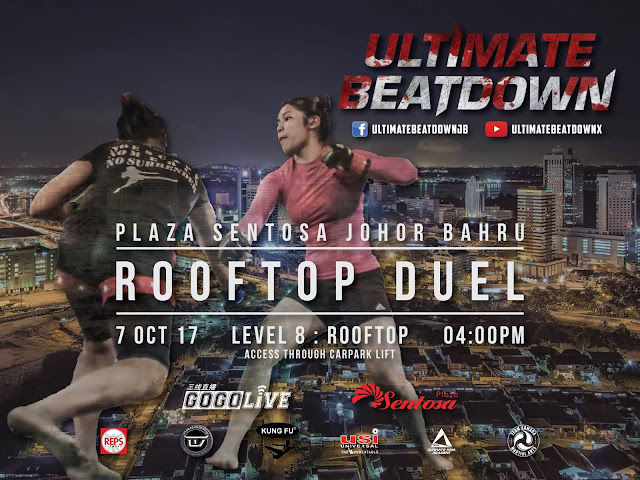