And the launch on Friday at Palace of the Golden Horses at Mines Resort City just outside Kuala Lumpur turned out to be a forgettable night.

It was poorly organised.

Just as many are trying to get over the nightmare witnessed throughout the KL SEA Games, the organiser of World Fashion Week Asia 2017 has made it look like Malaysians seem to have lost it when it comes to hosting major events and hospitality.

1. The Sultanah of Terengganu Sultanah Nur Zahirah was invited to grace the event.
a. There was no holding room for the Sultanah and VIPs accompanying her.
b. The Sultanah was invited on stage without anyone accompanying her there (a big NO NO if anyone knows protocol involving royalty).
c. The event dragged on till 11.30pm, way past the cut off point of the very many events I've attended with members of the royal family present.
d. The Sultanah was forced to walk all the way from the makeshift tents located behind the hotel where the event took place to the main hotel entrance. Efforts could have been made to get her vehicle and entourage closer to the venue.

1. The tables were not numbered accordingly. Instead sheets of paper with numbers were left on several tables.
2. Several guests were forced to stand as there weren't enough tables and chairs (this included those who 'paid' for their tables).
3. Those who paid for the tables (I was informed RM20,000 per table) were left shocked as the (one and only) main dish was fried mee hoon.
4. Guess many didn't realise among those present was Health Ministry director general Datuk Dr Noor Hisham Abdullah. Noor Hisham's eldest daughter Khairin Afina was among the UiTM graduates whose designs were paraded on the catwalk during the event.

1. Prior the launch I had asked those in the fashion industry, including those who took part in KL Fashion Week, if they were involved in World Fashion Week Asia. They all said "No".
2. Is it true many top models chose to ignore the event after they were only offered "peanuts" for the three-day event?

Here is what some of them had to say: 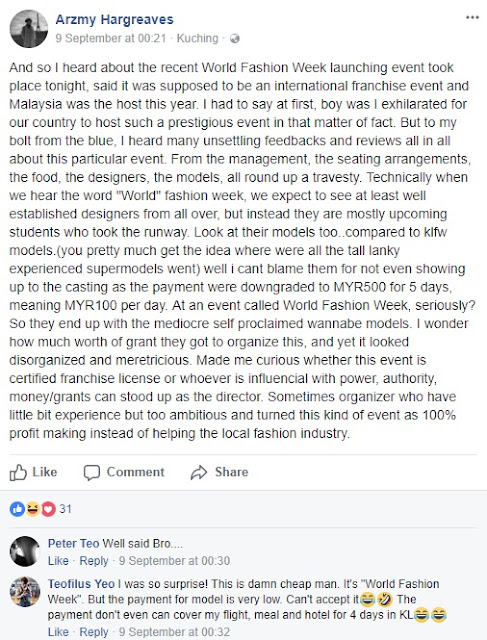 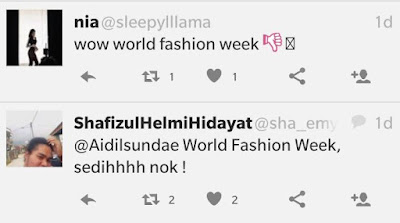 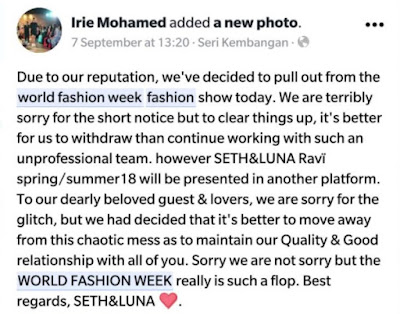 One thing sorely missing from the gala night was the Eco-Fashion & Lifestyle theme as promoted by the organisers.

Events held in Malaysia must be hosted and organised in a proper manner as the reputation of the nation is at stake.

Organisers who fail must be held accountable.