I was flooded with that question throughout the just concluded SEA Games - especially for the Malaysia-Thailand men's football final.

No, I didn't get any free tickets.

But was it right for our ex-internationals to ask for free tickets especially for the opening ceremony?

There were those who believe former 'Malaysian Olympians' deserve to witness the historic moment and watch our national athletes in action.


But others insisted these 'elders' should set an example and show their support by paying — arguing the tickets for the opening ceremony were, after all, priced at RM20 each.

There were also claims a large number of tickets were given out to certain individuals only.

For the record, only the venues of 19 sports, opening and closing ceremonies required fans to purchase tickets priced between RM10 and RM20.

Below are some of the comments made by our sporting legends in a WhatsApp Group. 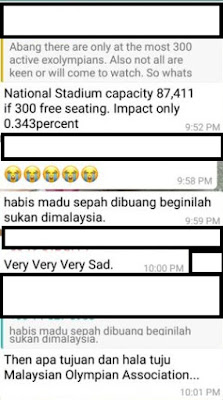