All the best, Josiah! 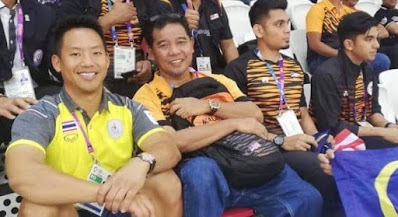 Yet, three-time Olympian Josiah Ng is seen as not good enough for the National Sports Council (NSC).

He was considered for a coaching role in the NSC cycling programme last year but he did not get the job eventually.

But the NSC’s loss is certainly Sarawak’s gain. The 41-year-old Josiah has now been entrusted with the task to coach the Sarawak cycling team for the 2022 Malaysia Games (Sukma) in Johor.

This appeared in The Star today.

The former national cyclist was also Thailand's coach. And Josiah was left stunned after he was branded a traitor on social media following Jai Angsuthasawit's Asian Games gold medal victory in the men’s keirin.

Instead of playing the "perhaps" game and trying to figure out why NSC has not tapped on his expertise, it's best we wish Josiah all the best.

You'll never know, he could eventually end up in NSC ...

Whatever will be, will be

The future's not ours to see