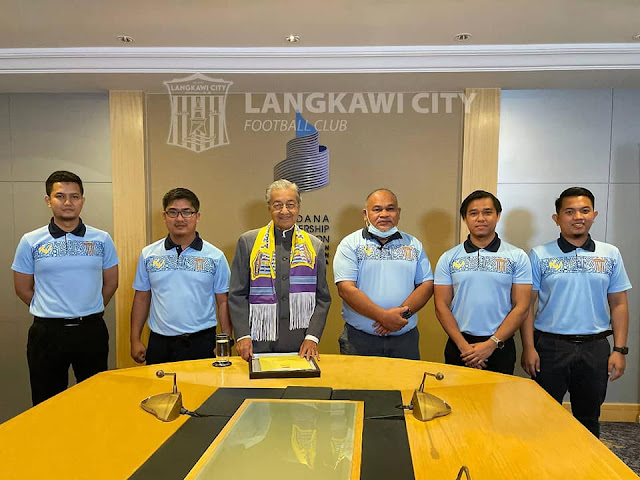 Seriously? Langkawi CITY?
It's a fucking archipelago! Why not call the team Pulau Langkawi? Copying the suffix of an English team owned by oligarchs is daft. https://t.co/R3ZPw89uSU

Here's a tweet from Antony Sutton who is based in Jakarta.

Just like Antony, I'm equally annoyed with the word 'soccer' being used in Malaysia.

In fact, the word 'soccer' is seen in Melaka United Soccer Association (MUSA).

I am, however, mindful that the word soccer comes from a slang abbreviation of the word association among British players back in the day.

Modern soccer was born in 1863, when representatives from several English schools and clubs got together to standardise a single set of rules for their matches. They dubbed their new organisation the Football Association, and their version of the game became known as “Association Football.” The word association was used to distinguish their specific sport from other popular games of the day such as “rugby football.”

The word soccer comes from a slang abbreviation of the word association, which British players of the day adapted as “assoc,” “assoccer” and eventually soccer or soccer football. (The habit of adding –er to nicknames in British vernacular is frequently attributed to Oxford students of that period, and can be found in other sporting slang such as “rugger” for rugby.)

The parallel names soccer and football (or the combined soccer football) were used more or less interchangeably to refer to association football until well into the 20th century, at which point football emerged as the dominant name in most parts of the world.

So back to Langkawi City FC. Firstly, Langkawi is not a city. So the name is a misrepresentation of the island.

I've never known the good doctor as being a football or golf fan. But he loves to cycle and is a petrolhead.

Perhaps, Dr Mahathir could turn Langkawi into a 'city' overnight?