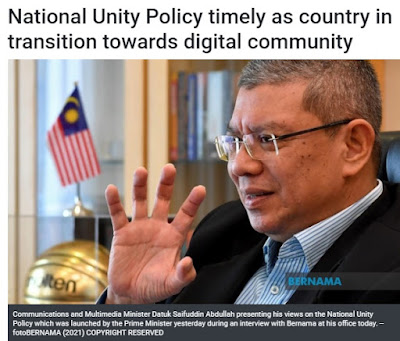 Since then, news website Twentytwo13 has been obtaining feedback regarding the initiatives.

UKM's Prof Datuk Dr Teo Kok Seong told Twentytwo13's executive editor Graig Nunis that the usage of Bahasa Melayu should be at the forefront of any unifying activity and policy in Malaysia. Read 'Make BM a tool for national unity'.

Senior lawyer and Rapera founder Datuk Seri Jahaberdeen Mohamed Yunoos, meanwhile, told Twentywo13 that the National Unity Blueprint seemed to lack the “necessary bite to give it a push.” Read ‘Many can’t speak BM due to attitude, usage’.

While the debate continues, Communications and Multimedia Minister Datuk Saifuddin Abdullah said sports need be given strong emphasis in the policy’s action plans as the majority of the people in the country love sports.

“Sports should be given higher priority…where else can you find multi-racial people stopped to watch the match involving the country’s football or badminton team, not only wearing the jersey but also flying the flag. This proves that sports unite us all.”

Saifuddin said the late Prof Emeritus Tan Sri Dr Khoo Kay Kim was once proved that sports could really unite the people when he became a writer in a sports column of a local newspaper to promote reading habit among the public.

“He was the only academician who wrote in a sports column and I had the liberty once to ask him why and he said he strongly believed that sports are meant for unity,” Saifuddin said.

To be honest, I would have expected such views from Youth and Sports Minister Datuk Seri Reezal Merican Naina Merican immediately after the policy and blueprint were launched. Oh well.