All the best to the Malaysian athletes - do it Demi Malaysia! 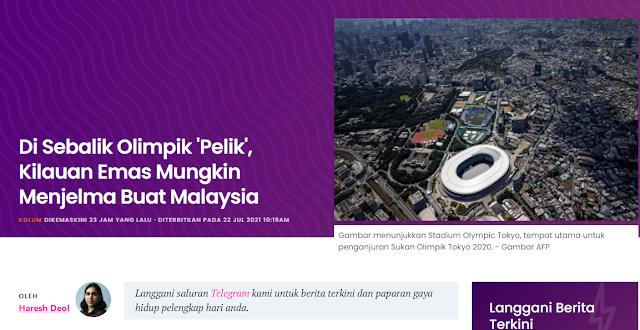 I've got a column in news website Getaran that appears twice a month.

My latest piece, which was published yesterday. It was naturally about the Olympics.

The Tokyo 2020 will officially open today. Thirty Malaysian athletes are in the land of the rising sun with a "target" set of three medals - one being the gold.

In my column, I wrote that it's an extraordinary and bizarre Summer Games - and the gold medal could, perhaps could, appear when you least expect the most.

While the attention towards the Olympics seems lukewarm at the moment, a podium finish by a Malaysian athlete will certainly put a smile on the faces of Malaysians - although for a mere second or two.

I also said this during my interview on BFM yesterday evening.

Many are placing their bets (not literally as betting is illegal in the country, but then again if a police station officer can party in a police station, anything is possible) on cyclist Datuk Azizulhasni Awang, shuttler Lee Jii Zia or diver Pandelela Rinong.

Some RM13 million was spent on the research and development of Azizulhasni's new machine, the Worx WX-R Vorteq.

Cycling Weekly has dubbed Azizulhasni's bike as "the most expensive of the Tokyo Olympics crop, with the frame coming in at £25,000."

Although Vorteq is based in the UK, Team Great Britain has instead decided to join forces with Hope Technology and Lotus Engineering along with input from British engineering company Renishaw.

And Cycling Weekly seems to believe: "Without a doubt the Hope x Lotus HB.T is the most radical machine to circle the Izu velodrome."

It's not just about the equipment but the rider. And it will certainly be an interesting time at the velodrome.

Lee, meanwhile, won the All-England in March without any spectators at the venue. The Tokyo Olympics will also see empty stands and perhaps this could once again work in Lee's advantage. But there's former world champion Chen Long and both players could clash in the last 16.

And one cannot rule the divers, especially Pandelela, out. She did, after all, win the gold medal in the women’s 10m platform at the FINA Diving World Cup 2021 and is a strong contender.

The other national athletes, who qualified by merit, are also capable of springing surprises.

All the best to the Malaysian contingent and stay safe!

Perhaps one should also say "all the best" to Youth and Sports Minister Datuk Seri Reezal Merican Naina Merican as he leaves for Tokyo soon.

As Parliament will hold a special sitting on July 26, he will surely be monitoring the updates in the august House closely, although the Dewan Rakyat speaker is unlikely to allow a motion of no-confidence against the prime minister to be presented.