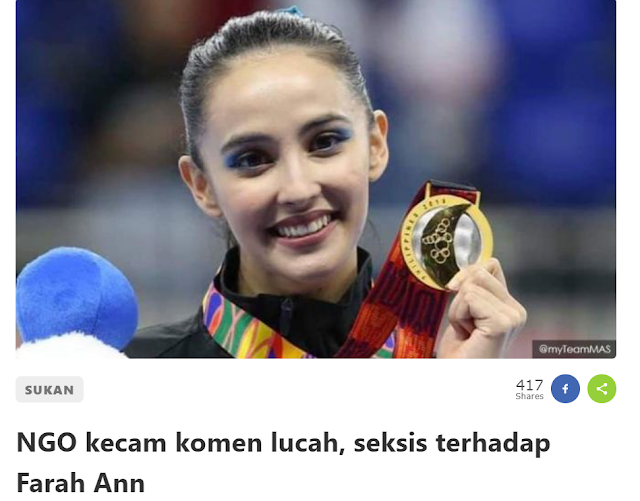 An MP has urged two ministers to speak up against the sexist and disrespectful comments levelled against Olympian Farah Ann Abdul Hadi.

It's basically about her attire. Nothing new as Farah Ann has, unfortunately, been subjected to such shallow comments repeatedly in the past.

This is what I wrote on Twitter two days ago:

To the perverts & bigots,

Just leave @farahannhadi alone, will ya. Don't you get bored repeating the same thing over and over again? Do something meaningful with your lives.

An NGO has also lashed out against the criticism hurled towards the national gymnast. Read here for more.
Below is the media statement by Batu Kawan MP Kasthuri Patto that was issued this morning.

Farah Ann, the darling of Malaysia exhibited skill, stamina, strength and tenacity in her brilliant routine at the Tokyo Olympics a few days ago.

She proudly bore the specially designed ‘Harimau Malaya’ on her outfit as she performed with hope and courage in her heart and the Malaysian flag on her shoulders.

She was greeted, thousands of miles away, by cheering supportive Malaysians, regardless of her placing nor medal but that the Jalur Gemilang was flown in the Land of the Rising Sun.

Unashamedly, she was also subject to sexist, lewd, disrespectful comments by men and women with archaic views on women, especially when she is in the limelight.

Insults were made against her, on her outfit, on her routine, towards her as a woman.

In 2015, the then Minister for Youth and Sports Khairy Jamaluddin spoke up and defended Farah Ann when she was subjected again to disgusting comments by men and women who trivialized a national gymnast’s achievement to the cloth wrapping her being.

To date we have not heard any statement by the Minister for Women, Family and Community Development Rina Harun nor the Minister for Youth and Sports to call out and condemn these sick, perverse men and women who have nothing else but filth on their minds and to stand together to defend Farah Ann in her endeavours in Tokyo.

How will Malaysia aspire to be taken seriously as a signatory to the Convention on the Elimination of All Forms of Discrimination Against Women (CEDAW) when we cannot even defend and protect one of us when she wears the Jalur Gemilang on her heart.

There will always be men and women who will throw insults in the form of sexist and racist remarks against women sportspeople. The onus is upon leaders to stand up to criticise and at the same time to educate and create an awareness for others to emulate.

Member of Parliament for Batu Kawan