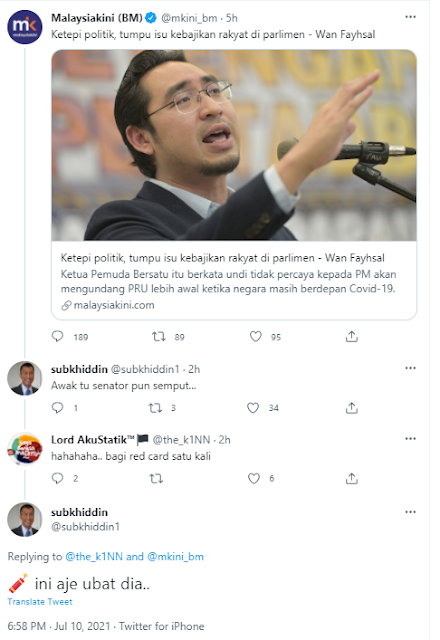 The Youth and Sports Ministry has a deputy minister. I shall stop at that.

What caught my attention is the manner in which former FIFA referee Subkhiddin Mohd Salleh, who has officiated matches at the World Cup, reacted to a MalaysiaKini article quoting the said deputy minister.

Traditionally, Malaysians tend to be extremely polite when it comes to politicians - even if they don't have the right qualifications, have never worked in an organisation and that they don't stay too long in office.

But in recent times, the lack of trust and respect in politicians are being made public. Subkhiddin's remarks on Twitter say it all.

Instead of viewing such remarks as an "attack" (a word often used by those in position), it's best to find out why people react in such a manner.

Personally, Yunus was far from "attacking" anyone. He was, in fact, spot on - especially on the subject of trust deficit.

Here's a sentence from his article:

Investing in trust should be considered a critical and central approach to reinforcing social cohesion, as well as a sign that the minister is learning from the current crisis.

Have a great weekend.