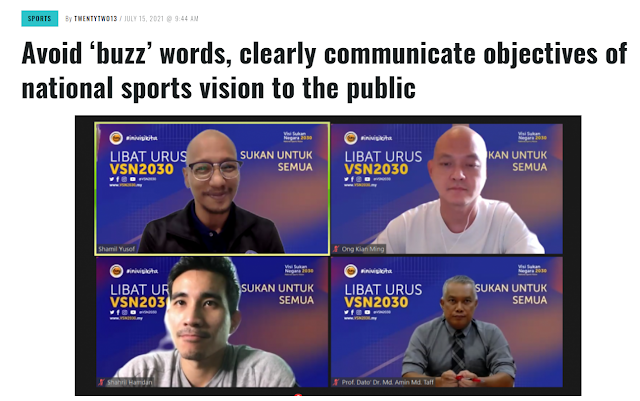 Shahril Hamdan was spot on with his views during a National Sports Vision 2030 (VSN2030) online session themed Sports For All yesterday.

The deputy Umno youth leader, who loves his Converse shoes as much as I do, went straight to the point by saying that clear communication was needed in presenting a sports vision for the next decade.

I hope what Shahril said yesterday did not cause any individual to cringe or "cry".

This is because the manner in which the session was first presented - the background, the vision, Zzzzzzzz - was exactly what Shahril was trying to get at. In his words (not mine), forget about the "long, fat document". The same goes for the processes.

Accepting what he said is the first step to moving forward.

Such views are aired because people genuinely want things to improve. No point organising sessions, or even inviting journalists to press conferences, if you only want to hear what you want to hear.

Not everyone has an "ulterior motive" or "ill intention". If you can't answer the basics, it goes to show that you are ill-prepared. Views that YOU don't want to hear are not "attacks".

Hopefully, Shahril won't be shunned by those who may construe his views as "attacks".

I know I may have irked certain individuals when I was invited to a closed-door session with members of the media ahead of the launching of the canvassing of VSN 2030 some three months ago. All I said during the meeting was based on facts that hads already been documented. Let's not try to rewrite history, shall we?

Learn from the past to move forward.

The VSN 2030 session was good. It showed those who attended hunger for more. There are many more such sessions.

And such sessions should be further publicised so that the industry players will know that their views - and not just that of politicians and academicians - are also being heard.