As OCM wants to play bigger role, time to scrutinise who has done what ahead of Sept 4 election 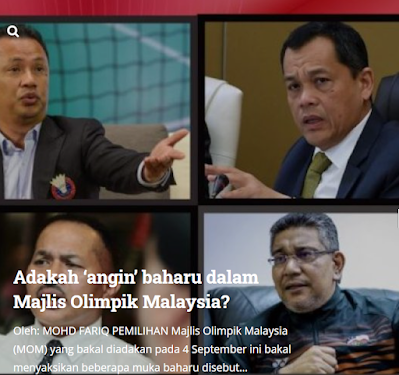 Following the withdrawal of Umno from Perikatan Nasional (PN) which resulted in Tan Sri Muhyiddin Yassin stepping down, only for an Umno MP to be a new prime minister, the former senior minister and I revisited our conversation.

That explains why everyone is being hush-hush about Saifuddin Abu Bakar's appointment as the next FA of Malaysia general-secretary as they want the announcement to be made public by the national body first. Just like in politics, despite signing the dotted lines, anything can happen at the 11th hour.

The other interesting event is the upcoming Olympic Council of Malaysia (OCM) election scheduled on Sept 4.

Tan Sri Norza Zakaria shouldn't have much problem defending his post as president. He will remind many of the initiatives carried out throughout his tenure including providing financial assistance to national sports associations via OCM's Covid-19 Fund and waiving the monthly rental of tenants housed at Wisma OCM.

He also plans to continue working on the pension scheme for national athletes and is determined to push for the Council to play a more pro-active role in Malaysian sports.

What about the other office bearers?

In the past, the other most influential role is the honorary secretary. Datuk Sieh Kok Chi's legacy remains while Datuk Low Beng Choo is also remembered for her role in the hot seat.

Talks are being held behind closed doors. Most of them have put up a diplomatic front, fearing their words could be misconstrued and thus hurt their chances ahead of the elections. To quote a sports official who will be casting his vote next month: "Very politician leh".

In order for the affiliates to make an educated decision, perhaps it's best for those intending to stand for elections to justify why they should be in OCM.

If the Council intends to play a bigger role in Malaysian sports, then those within must convince parties beyond the sporting fraternity why they deserve to be in office. People out there need to know who is part of OCM, what they have done and why they should be there.

Here's what you need to know for the upcoming elections:

Nomination process for positions in the Executive Board 2021-2025 will end today at 5pm.

The Chairman of the Election Committee Datuk Seri Jahaberdeen Mohamed Yunoos will conduct the opening of the nominations subsequent to that.

No names will be revealed over the next two days. The candidates' eligibility to stand for elections will be scrutinised during this period.

The final list of nominees will be announced during a press conference on Friday (4pm) at Wisma OCM ahead of the elections on Sept 4.