Norza, who turns 55 tomorrow (Aug 29), will be joined by another familiar face in the Malaysian sports scene - Datuk Hamidin Amin.

Hamidin, who is FA of Malaysia president, won the deputy president's post unopposed. 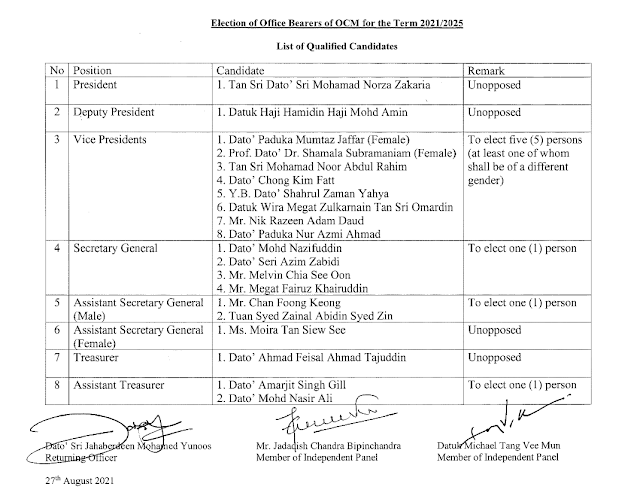 All eyes will now be on the secretary-general when the OCM elections is held on Sept 4.

I was shown a poster of one of the candidate at Wisma OCM yesterday. It looked like a poster of a desperate politician hungry for votes.

I asked Norza who among the four would be more suited for his team. I knew he wouldn't give me a straight answer as surely he did not want to be seen as influencing a decision or favouring any party.

In summary, he said: "It's for the delegates to decide who has done what and who best fits the role."

While it's the delegates who will head for the polls, they need to be mindful that their selection will also be scrutinised by those outside the system.

The situation is similar to the newly appointed Cabinet announced yesterday.

The line-up was decided by the person who enjoyed the majority support of MPs - and the political leaders who pledged their support.

The people, the main stakeholders, had no say. And in return we saw what was described as a "recycled" Cabinet.

As such, OCM's office bearers would also be under the microscope - especially with its plans of playing a bigger role in the national sports eco-system.

Norza, had once again, said that the Council must shed its image of being a "glorified travel agent". It now needs to prove that it has a respected line-up.

I then turned my attention to the treasurer - Datuk Ahmad Feisal Ahmad Tajuddin - who also won unopposed.

I asked if he would suggest that the OCM office bearers be tasked to bring money, besides ideas, to the table.

He somewhat agreed but was quick to add that it was for the OCM board to decide.

The onus of raising funds should not be the sole responsibility of one or two individuals or the marketing and sponsorship committee. It's a team effort.

Admittedly OCM enjoys grants from the International Olympic Council, has enough stashed up in its trust fund, some funds from sponsors and owns valuable assets (Wisma OCM and Olympic Hotel) in the heart of Kuala Lumpur. But a little more money won't hurt in a bid to promote sports to the masses and elite levels.

So let's set new key performance index for OCM office bearers to see who can bring money and ideas to the table.

Norza and Hamidin - with their entourage and experiences in the BA of Malaysia and FAM respectively - won't have any problems doing so. It's the rest that need to convince the delegates and public at large that they are capable of doing so.

If Prime Minister Datuk Seri Ismail Sabri Yaakob had asked his ministers to show results within 100 days, perhaps Norza should do the same with his office bearers once they get elected.

Sports do not just belong to the national sports associations. It belongs to the people.