Some may miss Reezal Merican, no one will miss his deputy 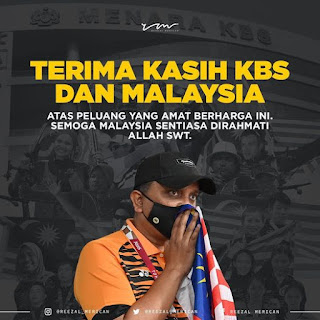 In April 2020, I met Datuk Seri Reezal Merican Naina Merican at his office in Wisma KBS.

It was during his early days in office, when Perikatan Nasional took over from Pakatan Harapan. And he had this to say:

“The sports industry is huge and it’s something we should look at. Also, it is a wealth creator as more youths, athletes and associations will be able to leverage on a thriving industry.”

Unfortunately, Reezal Merican could only do so much.

He entered the scene rather abruptly. Had to deal with an unprecedented crisis and no matter what he wanted to do, his hands were pretty much tied by the National Security Council.

It's a shame that then decision-makers couldn't see the benefit of sports but seemed fine with the Sabah state election that was held last year, accompanied by the year-end inter-state travel exodus.

Industry players are angry, tired and fed-up with the inability to operate and you can't blame them. The sports sector in Malaysia has been the first to shut and the last to open when a lockdown is enforced.

The RM3,000 one-off payment to sports operators is clearly insufficient. They don't want such handouts. They want something sustainable. The Finance Minister, an avid cyclist who owns a fancy bike, would surely know RM3,000 these days is nothing.

Reezal had plans - the National Sports Vision 2030. Admirable, but left disappointed by those initially tasked to oversee it. Read Twentytwo13's April 7 report:

This VSN canvas isn’t all white as work started last year. Earlier this year, Youth and Sports Minister Datuk Seri Reezal Merican Naina Merican repeatedly said the blueprint will be ready by the first quarter of the year as his team held engagement sessions with current and former athletes, past and present administrators, coaches, and even the media.

On March 27, however, Foul! hinted that VSN would be delayed.

Those in Wisma KBS remained diplomatic about the postponement. It is to gather more feedback, they said.

In reality, the work put into VSN over the past few months was clearly insufficient.

Some people were extremely unhappy with what I wrote. Boohoo.

My other issue is with the revamp of the Podium Programme which was described as a ‘plan destined to fail’ by experts.

I had in January wrote that the political instability could disrupt Podium Programme revamp, Malaysian sports.

And till today no minister - including Reezal Merican's predecessors - has revealed the final financial report of the 2017 SEA Games.

If only Reezal Merican was able to spend more time in office. We would then be able to truly gauge his capabilities. 15 months is too short of a time for anyone, really.

All the best, sir.

Oh before I forget, Reezal Merican had a deputy. That's all I can say, I guess.