January 19, 2014
The national badminton scene seems to be hogging the limelight for the wrong reasons recently.

The drama seen outside the courts is more apparent that what transpires during tournaments. The results of the players have not been satisfactory, but for men's doubles pair Goh V Shem and Lim Khim Wah who will play China's Chai Biao-Hong Wei in the Malaysian Open final today.

As expected, world No 1 Lee Chong Wei is set to retain his 10th title as he plays Tommy Sugiarto

Several matters were highlighted throughout the week including the 'resignation' of BAM general manager Kenny Goh as reported here.

While some parties had 'refuted' Kenny quitting the national stable, SS Dhaliwal provided the resignation letter on his Twitter account (pic below). 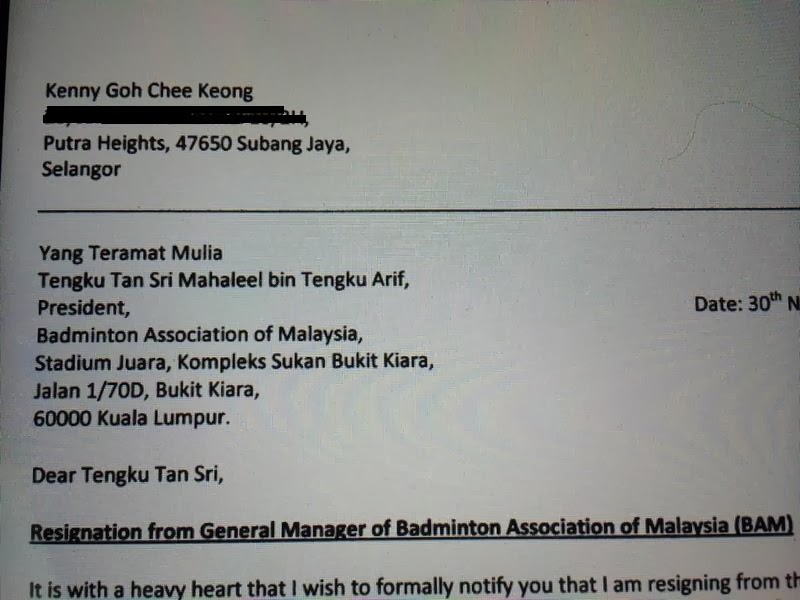 The Star, meanwhile, reported that Morten Frost could return to Malaysia to handle the Capabilities, Skills and Research committee, as apparently discussed during the council meeting on Saturday.

According to the English daily, the other matters raised during the meeting were:
As for Sports Minister Khairy Jamaluddin's comments against BAM, the national body's president Tengku Mahaleel Tengku Ariff said "he would meet the minister soon".