Segaran, who has already served 222 days, will be eligible for release in approximately 5 months, at which point he will be deported to Malaysia.

The court heard Segaran, who had played soccer semi-professionally and worked as an air conditioning technician and clown in Malaysia and New Zealand, had been recruited by a more senior member of the syndicate, known as “Jason”, through soccer circles in Malaysia.

Meanwhile, Wilson Raj Perumal, one of the most infamous match-fixers in the world, has been nabbed in Helsinki last week.

According to Helsinki Times, Wilson was taken into custody in the Finnish capital last Wednesday at 9.20 pm on an international arrest warrant issued by Singaporean authorities and is currently held in the nearby city of Vantaa.

The now 48-year-old Singeporean national was in 2011 sentenced to two years' imprisonment for fixing matches of the Rovaniemi-based football club, RoPS. After serving one year of his prison term in Finland, Wilson was handed over to Hungarian authorities. 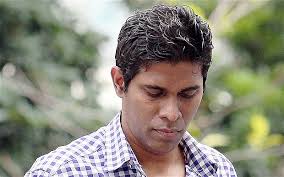 Wilson (pic) is alleged to have also fixed matches in Africa, the Middle East and Central America. He is believed to be behind scandal of a local Zimbabwe club masquerading as its national team playing games in Asia, including Malaysia, in 2007 and 2009.

The status of the Zimbabwe club — Monomotapa United FC — was exposed by Malay Mail in its article ‘Con Deal?’ published on July 13, 2009 after the imitation team played Harimau Malaya in two friendly matches in Kuala Lumpur.